Solidarity during the coronavirus…

Practical help, community building and stories of hope from all over the world are spreading the “antivirus” of fraternity.

A young Italian woman from the Focolare Movement posted this message on Facebook.  She is appealing for a radical change of mentality and action as her country rises to second place in the world ranking of nations affected by the Coronavirus.

As this virus continues to spread, it is affecting countries across the world in a variety of different ways –  health care systems, schools and the economy are in crisis in some areas.

The economist, Luigino Bruni, international coordinator of the Economy of Communion wrote, “Although we understand the concerns of many leading economists at the moment, we believe that the task of “civil enterprises” does not end in merely calculating the damage and in contributing to the spread of alarm.  This is the moment to demonstrate that the State is us and that corporate social responsibility is not only a marketing tool but is a genuine practice that is activated especially during times of crisis. It pays attention to common goods (health, work), practices correct communication, formulates concrete and sustainable proposals with an overall vision, initiates practical action in support of the most vulnerable people and enhances a system made up of companies, families, schools, universities, organizations and bodies that become protagonists of a new and indispensable proactive solidarity.”

Bruni referred to a recent example of social responsibility. Mahmoud Ghuniem Loutfi, who works as a delivery man in Turin, Italy, bought masks for the local Red Cross out of gratitude to the city that welcomed him and which has become his home. He did not think about the impact this would have on his finances but asked himself what he could do for his community, and, therefore, also for himself.

Mahmoud’s story is typical of the many examples of cooperation, sharing and solidarity we are seeing at the moment.

Gloria, a young girl who knows the Focolare in Hong Kong explained how technology is helping people to stay in contact. “We try to organize meetings by videoconference so we can stay united during this special period. Also, the fact that we have to spend more time at home with our family means we have the opportunity to understand one another better and share problems more.”

Caritas Lee lives in Ulsan, Korea. He told us about a fundraising activity at his university. “The goal was to raise 500,000 won (€380). Everyone was making small donations but I kept thinking about the 1595 people who had been identified as suffering from the virus at the time. Then a wonderful thing happened: a total of 46 million won (€35,360) was collected.  This was donated to the diocesan hospital and the Daegu health district, the region most affected. After this initiative, other universities wanted to raise funds to help the health system. In addition, many volunteers as well as doctors and nurses began to offer their services for free in the hospitals. Another thing is that some landlords are not expecting their tenants to pay their monthly rent and some people are leaving food in front of houses for those who can’t go out.”

Yopi lives right in Daegu. His house is near a hospital so you can hear ambulance sirens all the time. “At first, when I heard them, I prayed for the patients. Then I started to feel anxious. With the beginning of Lent I decided to pray the rosary every day. Slowly the anxiety has given way to peace in my heart.”

Micaela Mi Hye Jeong wrote from Gumi, also in Korea. “Here we’re preparing 150 masks to be distributed where the need is most urgent. We thought that instead of getting disposable masks that pollute the environment, we could make them ourselves from washable cotton.  During a time when we are frozen with fear, it’s as if my heart is beginning to feel warm again because of the opportunity to practically live what the Gospel teaches.”

In Brazil, Armando, an Economy of Communion entrepreneur, has a company that supplies the health sector. “During this period, the cost of masks and disinfectant has risen by up to   500%,” he said. “I asked myself how, in this situation, I could witness to what I believe in and live for?  I decided to go against market prices by selling my products at prices 50% (or more) lower than my competitors. What is more, my employees have all supported this policy.”

In Italy, some young people from the Castelli Romani area have offered to go shopping in local supermarkets and provide free home delivery. “If you are over 70 years of age or have health problems and, as a precaution, you prefer to stay at home, we will take care of your shopping,” the WhatsApp message reads.  “Don’t think about shopping, let’s get over this quickly.” 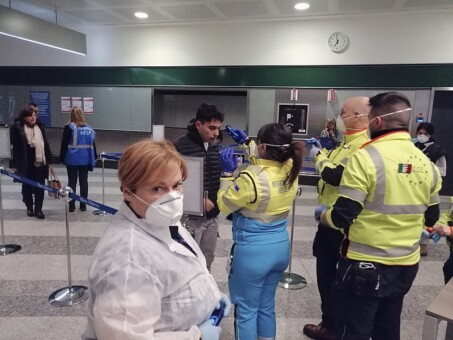 And also in Italy, in Gorgonzola, a small village in the province of Milan which is famous all over the world for cheese, don Paolo, a parish priest, and the mayor went to meet some of the civic leaders in the “red zone”. They took four large pieces of cheese, “a sign of the support our people want to show to all the people living in the surrounding area,” explained don Paolo. He continued, “I think this is a sign of wanting to donate an antivirus, the antivirus of fraternity. (…) We need to be careful not to infect other people but we shouldn’t adopt an attitude of suspicion. Instead, we should do so out of love for one another. Even giving up something or not going somewhere can be an act of love.” This is the time when we can transform an emergency into a “competition” of solidarity.