What is the future for Lebanon?

The land of cedar trees, discusses ways that may help the country emerge from the serious political-economic crisis that hit it recently. Hope never dies in a country that has passed through so much hardship. 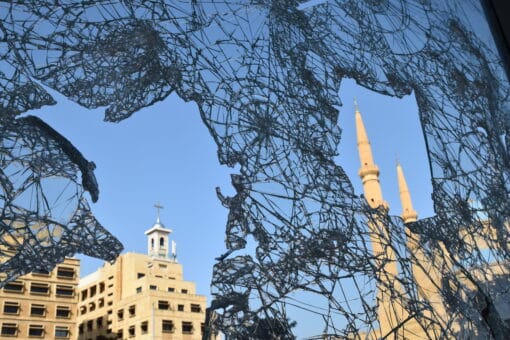 During the recent United World Week, the Lebanese Focolare community opted to discuss, with both youths and adults, the difficult way foward in a country gripped by tensions and facing several crises. The political-social crisis has been going on since last October 17, when the  “thawra” movement in Lebanon started protesting against a government accused of corruption and bad administration. The economic crisis exploded last March, when the government declared it could not repay its1.2 billion dollar debt to the European Union. In recent weeks there was also the collapse of the Lebanese pound, set at 1500 pounds to one dollar up to a few weeks ago and now trading for more than 4000. Lebanon is also facing a health crisis due to the coronavirus. The spread of the virus has not been excessive (less than a thousand people have been infected and there were less than 30 deaths) but the extended lockdown measures also hit the country.

Owing to lack of prospects, this situation seems to be encouraging people, especially young ones, to go back to an old tradition, namely expatriation. It is good to know that for every 4 Lebanese living in the Middle East, there are about 12 others living in other different parts of the world. This is happening also in other neighbouring countries, especially with Jews, Palestinians and Armenians. Emigration is particularly painful for the Lebanese, who believe (and it is true) that they have an amazing country, rich in history and natural beauty, a Middle Eastern crossroads for every kind of traffic and commerce, home of Nobel Prize winners and great merchants, filmmakers and writers, saints and scientists. One needs to highlight the fact that the diaspora is very painful for the Lebanese, especially when one considers their strong family ties.

In this context, the local Focolare Movement organized a Webinar with the specific title “Building a future by living for fraternity”. About 300 people from different countries, from Canada to Australia, to Spain and Italy, participated.

The two lawyers, Mona Farah and Myriam Mehannan spoke about one of the most serious threats that Lebanon is facing, namely the dangerous lack of certainty about the rule of law. Yet, Lebanon has a remarkable capacity to find the best solutions in complex situations and boasts of a very ancient legal tradition. Therefore one can understand the young people’s desire to leave the country and at the same time the will of many who want to remain to build a more united and fraternal Lebanon, where  18 confessional communities are united by a political system of “confessional democracy” unique in the world.

Then came the testimonies of two young couples, who decided to return to Lebanon twelve years ago, after working abroad for some time. They came back to contribute towards rebuilding their country after the so-called civil war. Imad and Clara Moukarzel,who work in the social and humanitarian field and Fady and Cynthia Tohme, who are both doctors, testified that it is possible to stay or return to Lebanon not to leave such a rich country in the hands of the most reactionary forces. Tony Ward, an entrepreneur in the field of high fashion, recounted his decision to return home twenty years ago, even though he was working in an established world fashion environment. He also spoke about his production change during the coronavirus crisis; for a few weeks he decided to produce sheets, masks and protection suits needed at Lebanese hospitals caring for Covid-19 patients. Tony Haroun, who has been working as a dentist in France for more than thirty years, spoke about the difficulties of expatriates, especially cultural ones, while he strongly affirmed that the willingness to listen to God’s voice allows one to overcome all sorts of obstacles.

Michele Zanzucchi, a journalist and a writer based in Lebanon, highlighted three qualities of the Lebanese people, qualities that can really be of great help in the current situation.He spoke of their resilience, that is their ability to face setbacks without being crushed by them; their subsidiarity, namely their ability to replace the State when it fails to provide essential services; and finally he mentioned creativity to which the Lebanese attribute great value while creating an infinity of projects: humanitarian, economic, commercial, political and so on.

Youmna Bouzamel, the young moderator of the Webinar, concluded by emphasizing  that Lebanon seems to have all the qualities needed to welcome the message of fraternity and that this is the only real possibility that the country possesses. If John Paul II said that “Lebanon is more than a nation, more than a country, it is a message”, today’s message is  above all one that proclaims fraternity. Great ideals and realism combined together.