This week on 20th June the young people of the Focolare are launching #daretocare via YouTube livestreaming – their new campaign to “take responsibility” for our society and the planet.  Jesús Morán, co-president of the Focolare Movement commented as follows: “We need a new ethical agenda; care has a strong political vocation and a strong planetary dimension. 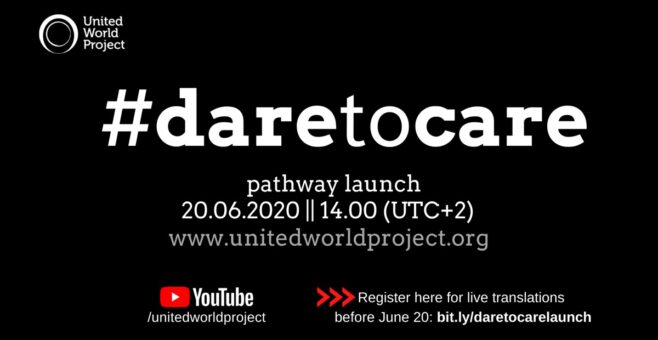 “#daretocare“. The young people of the Focolare Movement have taken seriously the words of Pope Francis and many other religious and civic leaders to find concrete ways of working together to care for our Common House. Through this new pathway they want to be active citizens, taking an interest in everything that is happening in the world to try and build a little bit of united world.

As Jesús Morán, co-president of the Focolare Movement explained: “In this time of deep humanitarian crisis due to the Coronavirus, a new vision is emerging which is the need for a new way of behaving and living, a new kind of ethical agenda, as some experts call it. And one category which is proving central to this context is caring, taking responsibility and taking care of others, society and the planet”.

Daring to take care therefore means being protagonists in everyday life to solve problems, initiating dialogue for a better society and being attentive to the environment and to all people whatever their colour, religion or culture. Especially today where racism is re-emerging, where human freedom is once again being undermined by totalitarian regimes, where weapons and wars are trying to impose their dominion on peace and unity among peoples.

“Care is a vast, beautiful and multifaceted category,” Morán continues. The ethics of care has to do with the dignity of the person.  This is fundamental.  It is at the very heart of caring; it is not an intimate, private thing. On the contrary, care has a distinctly political vocation and a strong planetary dimension, whilst not forgetting the local dimension because it is at a local level that we take care of others, in personal relationships, in society and in the local environment.  Neverthless, the planetary dimension is important.”

Pope Francis spoke about this on 24 May on the fifth anniversary of Laudato si’, calling for a special year of reflection – ending on 24 May 2021 – to bring the theme of caring for creation to everyone’s attention. And by creation we mean not only the environment that surrounds us but also the people, the economy, politics, the social aspect, etc.

Chiara Lubich, the founder of the Focolare Movement, defined politics as “the love of all loves”. A politician is someone who is at the service of their people, and Morán concludes, “today more than ever there is a need for this kind of love, and the category of care expresses it well.  It is precisely a concentration of this love we are talking about. So the proposal of the young people of the Focolare Movement is this: to put care at the centre of politics and of our lives as citizens”.

So, after a year dedicated to actions and projects on peace, human rights and legality, the young people of the Focolare will add another tile to the mosaic on 20 June with the #daretocare campaign, that of “care”, developed and refined around five main themes: listening, dialogue and communication, equality, fraternity and the common good, participation and care for the planet. And will this be done? By following the typical “pathways” methodology, the paths they have been following for three years: learn, act and share.

So: let’s take courage and dare.

Make an appointment for 20 June at 2pm (GMT + 2) with a worldwide online event on Youtube channel to launch this great idea #daretocare.