A first hand account from Ofelia, who herself emigrated from Venezuela to Peru with her family and now works with the Focolare community to help her fellow-Venezuelians who are suffering even more since the pandemic.

As members of the Focolare Movement, we have been running a solidarity program supporting Venezuelans in Peru for some time. The pandemic has forced us to seek new strategies to reach them where they are staying. 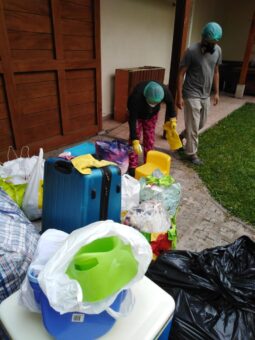 What we discover is that more than anything else, they need someone to listen to them. It’s not always easy because we’re not talking about one or two families, but many and the number is increasing every day. The monthly Word of Life always helps me because it encourages me to go out to my neighbours and recognize that I’m meeting Jesus in each one of them.

One morning a Venezuelan mother called me in tears about her daughter who was due to give birth in the next few days but was being threatened with eviction. I listened to her for at least an hour until she began to calm down. Whenever I felt like saying something, I reflected, “The only thing I need to do here is to love her, and she needs to talk this through”. Eventually she said to me, “Good, I’ve really unburdened myself”. That was the point at which I could tell her where to find the help she needed.

Initially, I thought that during quarantine, our work with the migrant community would slow down. But in fact it’s been exactly the opposite! For example, the work we carry ahead with CIREMI (The Inter-Religious Commission for Migrants and Refugees) keeps us very busy and has been a way to get to know each other better. The Commission members include some Scalabrini fathers, Christians from various Churches, the Jewish community, some Muslims, a Catholic reverend sister and a group from the Focolare Movement. 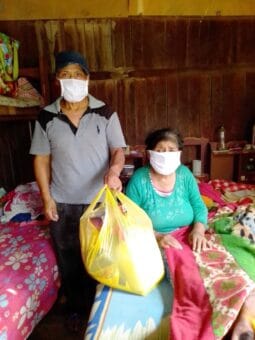 As we were considering how best to reach the most vulnerable, we began to receive requests for clothing and blankets. Because of lockdown restrictions, we arranged for a taxi to transport the clothes we had collected from the local Focolare community to a place in Lima city where they could be collected. And some baby clothes arrived just in time for two families with new-born babies. We regularly work in collaboration with the United Nations Agency for Refugees and they provided us with a supply of blankets which meant we could meet the needs of even more people.

It’s amazing to see how often we receive just what our people in need are asking us for. God doesn’t miss a thing!

One day I received a phone call from Carolina, a Jewish Community leader. She told me some of their families were transferring to Israel, and so had clothes and other items they’d be leaving behind. She was so happy when she heard we were collecting such things to benefit the Venezuelan community that she herself paid the taxi expenses to transport them over to us.

During this telephone conversation, we also asked about each other’s families, and it called to mind a phrase from the Word of Life: “It’s friendship – which can become a network of positive relationships and helps to bring the commandment of mutual love to life – that builds true fraternity”. The exchange with this my Jewish sister showed me the truth of this.

It’s wonderful to see how contagious fraternity is. The people who received clothes and blankets from us, in turn sent us photos and one of them wrote, “My next door neighbour was in need of clothing, so I shared what you sent with her”. A chain of remembering the needs of others has been forged. In this way fraternity finds a way of growing – even during quarantine!

by Ofelia M. as told to Gustavo Clariá