Pasquale Foresi, the first co-president of the Focolare Movement and an avant-garde theologian  was a very timid and a highly intelligent person. His first biography, edited by Michele Zanzucchi, has just been published in Italian. It relates the story of a man, the beginning of the Focolare Movement, a cross-section of history that has much to say to the Movement, the Church and society today. 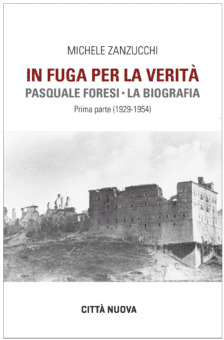 The first biography of Pasquale Foresi “In fuga per la verità”, who together with Igino Giordani was defined by Chiara Lubich as co-founder of the Focolari, was published on July 9, 2020. It gives a very well documented account of the first part of his life, from 1929 to 1954.  Even Focolare members knew very little about this part of his life because of Foresi’s reserved character and his style of co-governance, as we would say today. It is a very interesting text, published in Italian, but versions in English, French and Spanish are in the pipeline. It is studded with unpublished facts and it flows like a novel, that speaks of Foresi’s life and recounts all about the Movement’s beginnings and Chiara Lubich, as a person, from his point of view. It also makes us reflect on the present life of   the worldwide Focolare Movement, almost 80 years after its birth.

But who was Pasquale Foresi? Who was he for the very young Focolare foundress?

We put  this question to Michele Zanzucchi, the author of the biography, a journalist and a writer, former director of Città Nuova. He was well-acquainted with Foresi, but besides, it took him two and half years of research on  papers, texts, books and speeches to produce such a thorough and deep piece of work.

“Foresi met Chiara Lubich during the Christmas holidays of 1949. He was then a young man in his twenties, but he had already experienced a more adult life than his age; so he was “prepared” to collaborate with the Focolari foundress. He was the son of a Livorno family; his father, a teacher and a Catholic laity leader, later became a member of parliament and his mother was a housewife. He had three brothers and sisters. Since his childhood, Pasquale showed uncommon practical-theoretical intelligence. On September 8, 1943, the day of the armistice, at the age of 14, he escaped from home “to give some service to Italy”. Soon after, he joined the blackshirts, and then, because of the Nazis themselves, he took part in combats and he even fought at Cassino. Before he escaped, he freed deserters who were condemned to death. His philosophical-religious conversion started there. He was with the partisans when the war ended, and then, immediately afterwards he entered the seminary in Pistoia. Two years later he was at the prestigious Capranica in Rome. But he left; he could not accept the incoherent way some clerics lived the Gospel. He found this coherency in Lubich and her friends. Within a month, the teacher from Trent understood that God sent this young man to help her accomplish God’s work that had just started. Foresi cooperated with her in setting up centres of community living for virgins, in the Church’s approval of the Movement, in the building of centres and small towns, in the setting up of publishing houses and launching magazines, in the inauguration of university centres….. From that day on, Lubich remained faithful to the role God entrusted to Foresi, and she never abandoned this,  not even when he was struck by a serious cerebral illness in 1967, when he was barely 38 years old and he disappeared from public life. For her, Pasquale  always remained one of the two co-founders of the Movement, the one with whom she confronted every decision she had to make”.

What kind of priest was he? What was his vision of the Church?
“With a very traditional formation on the sacraments and priestly life, I would say neo-school. Foresi helped Lubich to develop an original idea of the application of the presbyterate, the idea of “Marian priesthood” stripped of “power” and animated only by deep rootedness in the kingly priesthood of Jesus. This idea of priesthood is still being applied and experimented today. For Foresi, in particular, the priest had to be a champion in humanity, in being man-Jesus. The underlying vision of the Church is linked to a prophetically conciliar perspective: the Church as the people of God, the Church-communion, naturally synodal and one that gives value (which does not mean in any way devaluing the  “sacramental” presence of Christ in his Church) to the presence of Jesus in humanity  in more “lay” forms, particularly in the presence promised by Jesus in the Gospel of Matthew: “Where two or three are gathered  in my name, there I am in their midst” (Mt 18:20)”.

Why did Chiara Lubich entrust Foresi, and not a lay person, with the realization of some of the Focolari‘s works, the so-called “concretizations”, such as the international centre of Loppiano and the launching of the publishing house Città Nuova?
“It would be great if this  question is asked to the one who could really answer it… However, I note that the other co-founder of the Movement was Igino Giordani, a married lay person, a member of parliament, a  journalist, an ecumenist. He met Lubich back in 1948, and the foundress saw in him  the presence “of humanity” at the heart of her charism. So for Lubich, Giordani  meant a radical opening to the world, following the priestly prayer of Jesus: “Let all men be one” (Jn 17:10). But in Foresi – who was of a more “concrete” nature than the “idealist” Giordani – she saw the one who would give her the practical support needed to achieve her work. We need to say that  Foresi was extremely “secular” in this characteristic, even though it was very clear to him that the  Movement’s mission  was primarily ecclesial, and that it could not be done without the ecclesiastics”.

Let’s try to guess: what would Foresi say to the Focolari and what would he invite them to aim at if he were alive today?
“A real gamble. I believe he would invite the Movement to do the necessary ‘updating’ , while keeping in mind the nascent state of the Movement. Therefore, he would  invite the Movement to go back to the founder’s mystical intuitions of 1949-1951, read them again and apply them.  And  also to look very carefully into  the process of  concrete realization that took place especially during 1955-1957, when Lubich received other illuminations that referred to the concretization of the previous mystical intuitions”.