Maria Voce on “Chiara still with us”

Maria Voce’s new book “Luce che avvolge il mondo” [Light that envelops the world], is published today by Città Nuova, for now only in Italian. It is a profound and courageous re-reading of the cornerstones of the spirituality of unity in the light of the questions posed by people today concerning our present times and the near future. 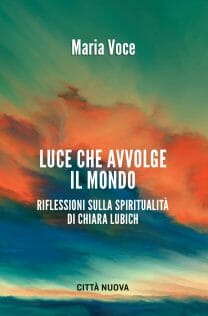 This is probably Maria Voce’s last book as President of the Focolare Movement. In it we find her thought regarding the Movement set out clearly and powerfully more than in any previous publication during her 12 years’ leadership of the Movement. The book reveals the cornerstones of her action and her legacy, but also her experience in the very delicate time following the death of a charismatic founder like Chiara Lubich.  This volume certainly deserves to be read “slowly” and meditatively, allowing time for reflection, because in it we find all Maria Voce’s spiritual, cultural and lived adherence to the charism of unity. It contains a series of talks given at various times on the twelve main points of the Focolare spirituality – God Love, the Will of God, the Word, our neighbour, mutual love, the Eucharist, Unity, Jesus Forsaken, Mary, the Church, the Holy Spirit, Jesus in the midst. These talks were given year by year during her two mandates.

In the preface, Maria Voce’s friend Andrea Riccardi [founder of the Sant’Egidio community] writes: “Maria did not want to repeat but to reread Chiara’s message and charism in a Church and a world that have changed. Spiritual movements grow in a deep tension between, on the one hand, faithfulness to their origins and their charism, and, on the other, an exploration of the life and developments of the future. […] It is an outstanding and remarkable example of the creative faithfulness that is required of a founder’s followers – especially if they are leaders”.

In the introduction, Jesús Morán, Co-President, asks himself with what spirit Maria Voce has written these texts and affirms it is one of actualization for our times. “She has not repeated the talks written by Chiara in the past, but has actualized them (…). She gives us her own renewed understanding of the points of the spirituality of unity that draws directly from the source of Chiara Lubich’s inspiration but also emphasizes further connotations and brings hitherto unexpressed shades of meaning to the fore. She has done this while being prompted also by the issues and concerns increasingly faced by the members of the Movement in the context of current events in the Church and in the world.”

Leafing through its pages we find a variety of questions posed more or less explicitly to Maria Voce by people in the Focolare Movement. In response to the question,: “What is God asking of the people in the Movement?”, she answered: “He asks each of us to reach out to our own environment, engaging with our neighbours in a spirit of unity, but being open to everyone. At the time, Chiara herself said that that would be answer enough. Chiara emphasized very strongly that above all God asks us to make ourselves one with the person who is near us, with those who share our life’s journey and with the people we meet day by day, even – as far as possible – the ones we hear about through the media. We are called, therefore, to live unity every moment of our life, day after day, as happened from the very start.”

Maria Voce also offers her reading of the lights and shadows on the progress of the Focolare Movement. She does so at a time in which the Covid pandemic has changed many things both at a personal and community level, and does so also in view of the upcoming General Assembly in 2021 during which the Movement will elect a new president and leadership:

“At this time, we feel that God is urging us to sow seeds of this message of unity in new and larger fields and not worry about diminishing strength or lost ground. We should joyfully witness to the opening up of ever new horizons and the flourishing of countless living cells of the Church spread throughout the world. This happens wherever two or more are ready to love one another with mutual love and to go out towards others so that, as Pope Francis wishes, many people may meet God.”

This attitude towards the current situation enables us to be enriched by an understanding of the present and look to the near future with the optimism characteristic of Maria Voce. She is certainly not naive, because she is well-grounded in the Gospel words that speak of unity and on the life that has sprung from it throughout the world.