A letter from the Lebanon Focolare community

Grateful for the solidarity received and committed together with other various religious communities to help the country rise again and be a messenger of peace.

We all know that Lebanon is still under a great shock. And Beirut is an unrecognizable city with apocalyptic scenes: destruction, high tensions, distress, anger and even violent episodes. 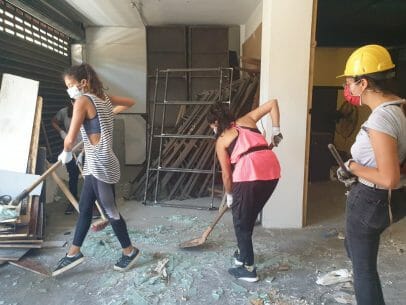 A few days ago, a letter arrived from this country that has been hit with such widespread destruction. It comes from the Lebanon Focolare community and it is addressed to Focolare members worldwide.

The letter reads: “With these words, each one of us would like to express a personal thank you to each  one of you. We are deeply and immensely moved by the immediate closeness shown to us from all parts of the world, from old and young, far and near, through phone calls and messages”.

Members of the Focolare Comunity continue to say: “Every morning, when we wake up and continue to discover the massiveness of the catastrophe, the material damage, the number of hospitals badly damaged and rendered unfunctionable, the polluted air we breathe, we feel like ‘survivors’. Each one of us could have been right there at the scene of the drama. And maybe some of us were, but a providential hand made them change place. However, we all feel that a new life has been given to us, as a young woman, just out of an elevator gutted with the explosion, said”.

They continue to relate that in the streets, where everything seems to cry out despair, “many people from north to south, members of various religious communities, are working hard to clear the rubble. Each one, in his own way, is a living witness that the ‘resurrection’ will win over the death of the city, the country, the dreams of many”.

They conclude: “Together with you, we want to move ahead so that a Lebanon that passes on a message of peace, unity and universal brotherhood and be a model of a united world, will be reborn”.

————————————————————–
The contributions paid on the two current accounts with this purpose will be managed jointly by AMU and AFN.
There are tax benefits for these donations in many countries of the European Union and in other countries of the world, according to the various local regulations.
Italian taxpayers will be provided deductions from taxable income, up to 10% of the income and with the limit of € 70,000.00 per year, with the exception of donations made in cash.