Peru – Authority and mercy, two sides of a coin

Combining fatherhood and professional life according to Gospel values: here’s the testimony of a Peruvian doctor at the forefront of the fight against COVID-19.

I have been a doctor for 25 years and a father for 17, but I realise that I have not yet learned to be both and keep to the values I believe in. These pandemic times are proving to be a real lesson for me to grow in both roles, especially in parts of it that have so far been underestimated not only by me but by most people. 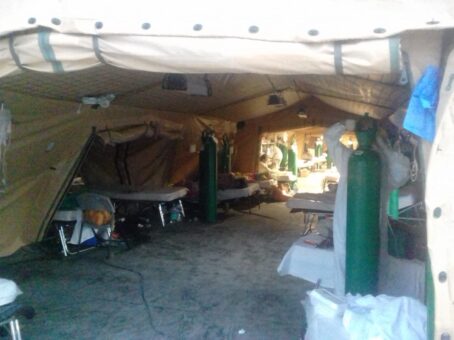 Since the beginning of this pandemic I have worked in a Covid field hospital for patients in the city of Piura in northern Peru, the first in the city. I look after those who are hospitalised and have seen more patients die in the last 3 months than in all my 25 years of medical practice.

I trained in one of the best medical schools in the country, with its academic prestige and scientific rigor. Yet this terrible disease has uncovered the limits, impotence and frustration of medical science in the face of this previously unknown virus.

In spite of administering oxygen massively and the therapies provided by science, I have seen my patients suffer quite a lot and die of asphyxia. Every day we are faced with the lack of staff and equipment in a hospital like ours, in a poor country.

How many times have I felt powerless and frustrated facing my patients, when the disease became aggressive! In the midst of general bewilderment, you could hear them shouting: “I am thirsty! Water please! Give me some water! Water!” Other times people would complain and, only when approaching them, asking if they wanted to drink, would they nod their heads.

That’s how, in addition to my medical work, I started to give drinks to everyone who asked me, fix their pillows, hold their hands between mine, caress their foreheads, massage their backs when they asked me, or pass them the bucket to urinate. Or I would simply help them walk, pray with them or for them and, in the end, try to comfort them in their last moments.

I understood that there are two dimensions to the medical profession: an authority supported by science which often heals, as well as the human dimension, based on mercy and love, which come from God and can be expressed in simple, everyday acts which often heal the soul. Science and humanity, knowledge and mercy, body and soul, man and God, reason and faith: it is a two-faced coin that makes our giving and living full. It is a delicate balance to be achieved.

Between the exhausting work in the hospital, the overload of intense emotions and my weaknesses, I went home for dinner just hoping to rest and let off steam.

My eldest son, in the midst of adolescence, frustrated by the lockdown and with all the energy of youth, started arguing with everyone, especially with me. He treated me like an adversary or an enemy, and at the table it was like being on a battlefield.

Initially, falling victim to my passions and impulsiveness, we clashed in bitter fights with offensive tones. For the umpteenth time I saw my authority compromised. My attempts to impose it by force made things worse.

I rediscovered other aspects of being a father, such as mercy and humility, and so I began to remain silent and offer God my forgiveness in the face of the offenses, as well as express it and ask forgiveness when I realized I had gone too far. I tried to read in my son’s aggressive attitude a cry for help and affection, keep silent more often and tone down the discussion, and continue praying alone and at home even when it all seemed useless.

Little by little our relationship has been normalising and returning to the usual father-son dynamics. Once again, there are these two main pillars: authority and mercy. Are they not expressions of divine life?