Vietnam: a response to the poverty that has arisen from the pandemic

Solidarity projects initiated by the “Goccia dopo goccia” (drop by drop) Association in collaboration with other organizations operating in Southeast Asia. 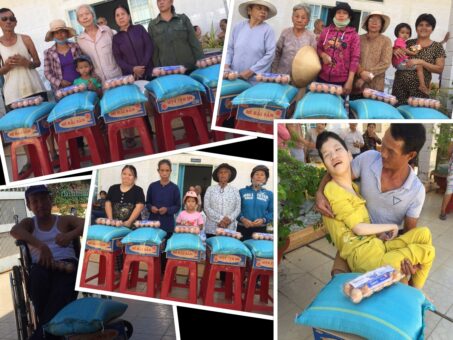 The number of victims of coronavirus around the world is still very high. But even higher is the number of people who, whilst not having contracted the virus, find themselves in conditions of extreme poverty due to the economic and social situation created by the virus; deprived, in some cases, of even the basic necessities to live. Yet even in these situations, initiatives of solidarity are multiplying which are the result of networks that are sometimes crossing national borders.

In Vietnam, for example, the Long An area, south of Ho Chi Minh city, has large pockets of poverty. Here, the most vulnerable members of society have been indirectly affected by the pandemic. Many, especially among the elderly, who were living off lottery ticket sales, have had to stay in their homes, very often facing starvation.

This is precisely the area where the Swiss-based association “Goccia dopo goccia” operates, coordinated by an Italian focolarino, Luigi Butori, who has lived in Asia for many years. Included amongst those who volunteer and support the project in different countries around the world are many friends of the Focolare Movement. “Goccia dopo Goaccia” has been working for some years now to implement more than 20 solidarity projects in Thailand, Myanmar and Vietnam. 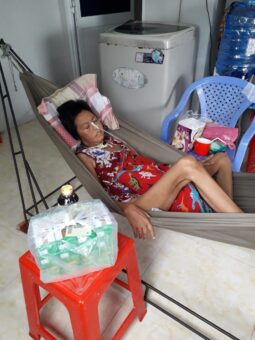 In Long An the association distributes about 40 rations of milk and food every month which helps many people including the elderly, those who are disabled, adults on their own, abandoned children living with grandparents and people suffering as a result of serious accidents, such as An, 14 years old, who is paralyzed and forced to live in a bed.

The association has someone who intervenes at a local level whenever necessary. Thanks to these local volunteers, it tries to reach the “least of the least” bringing not only material help but also moral support that makes them feel that they are not alone in facing this dramatic period of history. For those responsible for “Goccia dopo goccia” this is a very important element of their activity: making people feel that they have not been abandoned but that there is someone who is taking care of them, starting with a smile. The Long An project has been going on for about two years and is supported with the help of schoolchildren and families in different countries around the world.  They are people who send small amounts of money and who, as the name of the association says, as numerous small drops enable large quantities of help to be provided.

“Goccia dopo goccia” also operates along the border between Thailand and Myanmar, with another project that supports Karen children in different villages in Mae Sot, the Mae La refugee camp and the Heavenly Home orphanage, even though during these times of pandemic, “Goccia dopo goccia” volunteers recently had to face a long journey to visit them and deliver material aid. “Three beautiful days,” they say, “during which we received much more than we gave.

And finally, when Covid-19 was rapidly spreading, “Goccia dopo goccia” managed to collaborate with Caritas Singapore, Caritas Vietnam and other Associations that operate in Southeast Asia on a project aimed at distributing 1,200 food packages to families in the Binh Thanh area, in Ho Chi Minh City.