EcoOne, ecological initiative of Focolare Movement, organizes the International Meeting “New Ways Towards Integral Ecology: Five Years After Laudato Si’ ” to be held in Castel Gandolfo (Rome) between 23 and 25 October 2020.

The story of our planet is a story of relations among its parts. Let’s focus on three of them: atmosphere, living organisms and mankind.

2.5 billion years ago, oxygen was not present in the atmosphere and human life would not have been possible. Then, thanks to the small contribution of countless and (apparently) insignificant simple single-celled organisms – cyanobacteria – the air was enriched with oxygen until it assumed its current composition. This is an example of a positive effect of living organisms on atmosphere, at least from our point of view.

Starting from the XIX century, mankind massively burned carbon and oil, restoring back carbon dioxide in the atmosphere, eventually causing global warming. In this case, the effect of mankind on atmosphere is negative, still from our point of view.

On 11 September 2020 the following figure has been published in Science, a very important scientific journal, showing that – if greenhouse gas emissions are not reduced – continental ice sheets will disappear by 2100 and polar ice sheets by 2300: climate will go back around 50 million years. Earth will survive but consequences on mankind can be severe in terms of extreme weather events, flood, droughts and sea level rise: we don’t have too much time to face the challenge of restoring harmonious relations among mankind and the other parts of our planet. 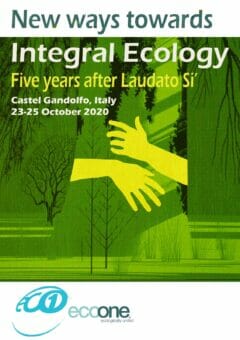 But why are we continuing to burn fossil fuels? The reason has been explained by Pope Francis in his encyclical Laudato Si’ of 2015 and summarized on 3 May 2019 in his address to some representatives of the mining industry: “The precarious condition of our common home has been the result largely of a fallacious economic model that has been followed for too long. It is a voracious model, profit-oriented, shortsighted, and based on the misconception of unlimited economic growth. Although we frequently see its disastrous impacts on the natural world and in the lives of people, we are still resistant to change.”

EcoOne, ecological initiative of Focolare Movement, organizes the International Meeting “ New Ways Towards Integral Ecology: Five Years After Laudato Si’ ” to be held in Castel Gandolfo (Rome) between 23 and 25 October 2020 that will be broadcast in the main languages all over the world.

Prominent speakers will intervene illustrating the contemporary environmental challenges facing science, technology, economics and society, with the purpose to contribute to the change advocated by Pope Francis by opening a transdisciplinary, interreligious and multicultural dialogue on the care of our common home.

(More information on how to connect to the meeting will be updated frequently on www.ecoone.org).