Metropolitan Gennadios Zervos: a man of dialogue and of unity

A brief profile of the Metropolitan who was a great friend of the Focolare; it is also an expression of Maria Voce’s prayers and closeness to him, on behalf of the whole Movement. 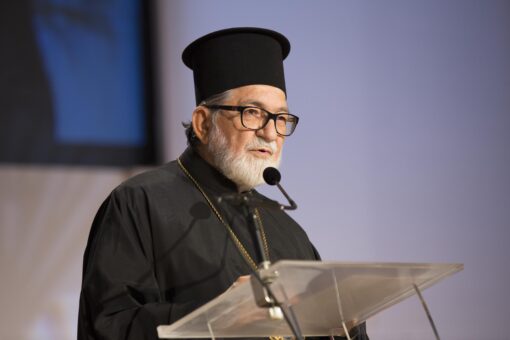 Today 16th October, the Orthodox Archdiocese of Italy and Malta (Patriarchate of Constantinople) announced that Metropolitan Gennadios has “passed into heaven” [1].

He lived in Italy for 57 years, first as a parish priest in Naples, in 1970 as Bishop of Kratea and then from 1996 as archbishop of the diocese of Italy and Malta and exarch of Southern Europe, the seat of which is in Venice. Metropolitan Gennadios had a great love for the faithful of his Archdiocese that emerges from a recent letter (dated 3rd October), in which he wrote: “You are in my heart. You are my life!”[2].

In 2007 Patriarch Bartholomew said of him: “with immense love […] you have worked for many years in a missionary way for your flock, distinguishing yourself as having many and various charisms, which express the personality of your Eminence. The following can be singled out from your character as being the greatest: humility, gentleness, tranquility and wisdom. But the greatest of all is your love and faith towards the Mother Church”[3].

He was a man of dialogue who actively participated in ecumenical activity in Italy and beyond, as can be seen in this interview with Vatican Radio in 2015: “Praying means walking together and, as Pope Francis once told me, ‘walking it means union. When we walk together, unity is closer to us ‘” [4]. Speaking of the division of Christians, he said “We must now be crucified, we must climb onto the cross, to make our passions, our defects and our errors all disappear. Jesus Christ no longer comes to be crucified but we must be on the cross to erase fanaticism, hatred, selfishness”[5].

A great friend of the Focolare Movement, the Metropolitan often recalled an interview with Patriarch Athenagoras in 1970. “He received me for 48 minutes! Numerous bishops, priests, theologians and others were in the corridor waiting for the blessing of the Patriarch. Everyone was amazed that I had been in audience for so long […] What had happened? The Patriarch had talked about me for 2 minutes, about Pope Paul VI for 5 minutes and about Chiara for 40 minutes! “[6]

He took part in many events of the Focolare: from the meetings of the bishops who are friends of the Movement, to the schools of ecumenism and the ecumenical weeks organized by the Centro “Uno” [7]. During the last edition, in 2017, he gave Maria Voce a medal in recognition and gratitude for the ecumenical work of the Focolare. It was his idea to found the “Patriarch Athenagoras – Chiara Lubich International Ecumenical Chair”, of which he was joint holder, at the Sophia University (Loppiano, Italy) and in 2017 he held the inaugural lecture entitled “Patriarch Athenagoras and Chiara Lubich, protagonists of unity”[8].

Metropolitan Gennadios was able to meet Chiara a few days before her death when he visited her, together with Patriarch Bartholomew, at the “Gemelli” Polyclinic hospital in Rome. Of that last meeting he remembered: “She was full of joy, smiling as always, gentile, serene and her “Charism” was very much alive. In fact, her last words before leaving us were “Always united!” [9]

Metropolitan Gennadios seems to have fulfilled what Patriarch Athenagoras prophetically told him in 1960: “You will go to Italy, we need new priests for the times to come, times of reconciliation and dialogue with the Catholic Church” [10].