Just days after the Metropolitan’s death, we publish the tribute prepared by Monsignor Piero Coda, professor of Trinitarian Ontology at the Sophia University Institute of Loppiano (Italy) where he was Dean from 2008 to 2020. 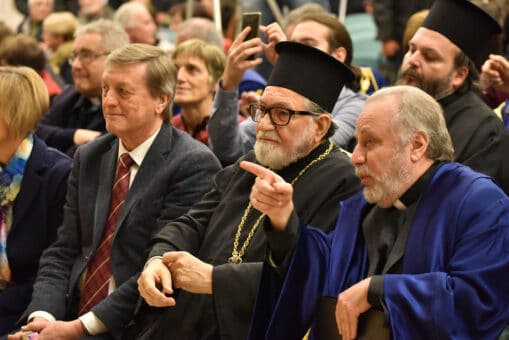 “He had a vision: a door was open in heaven…”. With these words, taken from the book of Revelation, the Metropolitan Gennadios Zervos, Orthodox Archbishop of Italy and Malta, loved to describe – with a gaze full of wisdom – the meeting between Patriarch Athenagoras and Chiara Lubich.  Athenagoras used to say, “because if the door is now open, we are called to go inside together: to share in the wonder and joy of the divine gift of Unity”. I cannot find more appropriate words to describe the flame that lit the heart and illuminated the action of Metropolitan Gennadios. He was an extraordinary and tireless apostle of Unity between the Church of the East and the Church of the West that we have known since the Second Vatican Council until today.  His work began way back in 1960, when he arrived in Italy from his native Greece, sent by Patriarch Athenagoras. A humble and ardent disciple of the Eastern Church with its two-thousand-year-old tradition. A tradition impersonated by the prophetic figure of Patriarch Athenagoras, and in which Metropolitan Gennadios  had been formed from the time of  his studies at the historic Theological School of Chalki, an  experience he had shared with the future Patriarch Bartholomew; and in the charism of unity given by the Holy Spirit to Chiara Lubich for the whole Church of our time, beyond confessional distinctions. He thus lived, as an active and discreet protagonist, the great progress inaugurated by the reconciliation between Rome and Constantinople at the close of Vatican II, sealed by the historic embrace between Pope Paul VI and Patriarch Athenagoras in Jerusalem. He continued then with tenacity and without hesitation on this road, contributing in a unique way, in Italy, to the mutual knowledge of the two sister Churches. Along the journey he joyfully nourished himself with the light of the charism of unity.

Metropolitan Gennadios animated his ministry in the Orthodox Diocese of Italy and Malta, with this spirit leading the diocese with foresight as Archbishop – the first after almost three centuries – to a magnificent flowering in the constant search for communion with the Catholic Church and in a sincere dialogue with all. Finally, as if it were the precious legacy he wanted to leave us, he intensely desired the Ecumenical Chair Patriarch Athenagoras-Chiara Lubich at the Sophia University Institute in synergy with the Ecumenical Patriarchate of Constantinople: “a sign” – he stressed on the day of the inauguration – “of our infinite love for these two extraordinary protagonists of the dialogue of love”. With amazement and gratitude, I am a witness of how close to his heart this last initiative was.  For him, it was a new contribution so that the ‘miracle’ rained down from Heaven might continue. ‘Miracle’ is how he described the meeting between Athenagoras and Chiara – Chiara had become a living bridge between the Patriarch of Constantinople and the Pope of Rome, Paul Vl. He even considered it indispensable to the ecumenical journey towards full and visible unity: “the love between Athenagoras, Chiara and Paul VI “- he repeated – “is such a powerful reality that no one can erase it anymore, because it is the presence of Jesus in their midst”.

With immense gratitude we gather from his hands the witness he transmits to us. As we remembering him , we are deeply moved by the words of Patriarch Bartholomew who wanted to celebrate his many and luminous charisms in which we rejoiced, and which we now contemplate in a fuller light: “among them the greatest are humility and gentleness, peace and wisdom, and the greatest of all love and faith towards Mother Church”.