The Latin American Church and the pandemic

Open to all, a Webinar promoted by the Pontifical Commission for Latin America to reflect and analyse the impact and consequences of COVID-19. The social, economic and political implications along with the thought of Pope Francis. 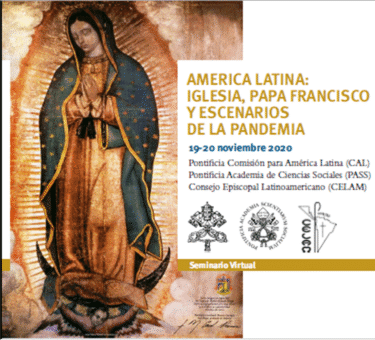 The virtual seminar entitled Latin America: Church, Pope Francis and the pandemic scenario will take place on November 19th and 20th  2020 and will be open to all those interested in this part of the world, which is also heavily affected by the virus; a situation already problematic due to many areas of poverty and marginalisation.

The Pope will contribute with a video-message. Contributions will also be made by Card. Marc Ouellet, President of the Pontifical Commission for Latin America, Mgr Miguel Cabrejos Vidarte, President of CELAM, Carlos Afonso Nobre, Nobel Peace Prize winner in 2007, the economist Jeffrey D. Sachs, Director of the entre for Sustainable Development at Columbia University and Gustavo Beliz, Secretary for Strategic Affairs of the Argentinean Presidency.

The introductory note to the seminar explains that to date, on the Latin American continent, as in the rest of the world, it is impossible to calculate the damage of the pandemic: “In many cases, the negative effects of border  closures and the consequent social and economic repercussions were only the beginning of a spiral of damage not yet quantified, and even less a medium-term solution”.

For this reason, the seminar will be an opportunity for the missionary and pastoral work of the Catholic Church and the contribution of various specialists from the world of economics and politics to meet and dialogue in order to strengthen a cultural and operational network and thus ensure a better future for the continent. Pope Francis will also participate at the presentation of the Task Force against Covid-19, established by him and represented at the seminar by its head who will present the work of the Task Force.

In times of uncertainty and lack of future, the Church looks to the “continent of hope” and seeks shared instruments that can transform the crisis into opportunities or at least find a way out.

For the programme of the event sign in here