“Listen to the voice of the Lord today”! These words, taken from Psalm 94/95,  “the thought for the day”, also known also as “Passaparola”, which reaches  Focolare members worldwide daily, could not have been  more appropriate. In fact, the elections for the future President of the Focolare Movement started  today, and the first priority for the voters is to listen well to the voice of God to identify the right person who would be the president for the next six years. 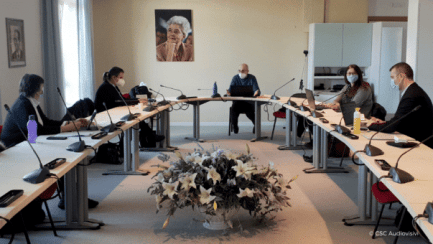 As provided  by the General Statutes, the following three steps are to be taken when  electing  the new President:

An electoral commission, presented to the Assembly and confirmed at its first plenary session on  January 24,  ensures that  election rules are followed. The five members are all legal experts: Danilo Virdis, a married  focolarino from Italy; Flavia Cerino, a focolarina from Italy, Laura Bozzi, a volunteer from Italy; Waldery Hilgeman, a  volunteer from Holland  and Sr. Tiziana Merletti, an Italian Franciscan.

The election process will continue tomorrow, February 1. Once the President has been elected, the Co-President will be elected in the same way.

Communication Office of the Focolare Movement