A very intensive day of work has come to an end for the General Assembly participants. 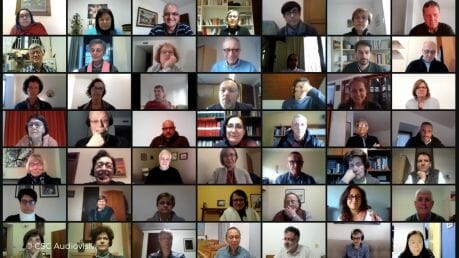 Between yesterday and today they analysed and voted on a number of motions about the future life of the Movement. A first draft of the final document has also been written. This summarises the orientations and the plan of action on the topics discussed in the various working groups.

It needs to be said that time constraint and the technical conditions imposed by the telematic mode posed a challenge for the Assembly’s work. Nonetheless, every effort has been made to enable everyone to contribute, to experience unity in diversity, and to plan together a final document to be handed over to the new Government.

Roughly, it has been calculated that 13 to 15 hours of work were put into each topic and a total of 3,500 working hours were invested in the first draft alone. All this work has been achieved through the help of several specialised platforms and three professional facilitators.

An extraordinary appointment for tomorrow morning: Pope Francis will receive the General Assembly in a private audience at the Paul VI Hall. Some participants will actually participate in person, while most of them will follow via streaming.
The outgoing president, Maria Voce, will introduce the newly elected Margaret Karram to the Holy Father. The new president will address Pope Francis, who will then speak to those present and to the Assembly participants who will follow through the link-up.

Detailed information about the live broadcast, that all may follow, is available on the following link: