On Sunday, April 18th, Igino Giordani, a politician who inspired the social commitment and ideal choices of many, a writer and journalist, and co-founder of the Focolare Movement, will be remembered through live streaming. The latest biographical book will be presented and a sculpture dedicated to him will be inaugurated.

A man of dialogue and deep faith, a supporter of universal fraternity, a builder of peace, a politician, a journalist: Igino Giordani (1894-1980) is all this and much more. April 18th, 2021 will mark the 41st anniversary of his death, and the Igino Giordani Centre has organised an event to commemorate his life. A personality who continues over time to arouse interest in people of different ages, geographical, political and cultural backgrounds calling for commitment to build a better society.

The event will be broadcast in live streaming ( https://live.focolare.org/  ) from the International Centre of the Focolare Movement (Rocca di Papa, Italy) on Sunday, April 18th, 2021 at 3:30 p.m. (Italian time) with the possibility of following it in Italian, English, French, Spanish and Portuguese. 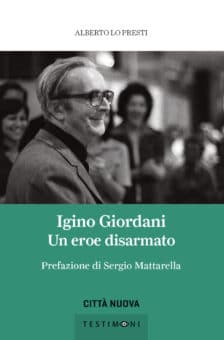 Giordani was a journalist and writer, but he played a very important role in Italian politics. In fact, after World War II, he made a valuable contribution to laying the foundations for the nascent Italian Republic in a period that was not easy for the country, i.e., close to the world wars.  He was also a member of the Constituent Assembly, a witness to politics as a service to peace and to a more just society. With this in mind, there will be some testimonies from those who have translated Giordani’s wisdom into bills or political initiatives in favour of dialogue and the common good, or those who have understood what choices are right to make in order to oppose policies that threaten peace among peoples.

During the event, the latest biography by Alberto Lo Presti (ed. Città Nuova Italia), entitled “Igino Giordani. Un eroe disarmato” (Igino Giordani. Igino Giordani, an unarmed hero), with a preface by the President of the Italian Republic Sergio Mattarella. This biography helps to rediscover the sense of an authentic political and social commitment. The biography is as gripping as a novel. Mattarella writes about Giordani: “His lively faith, his evangelical consistency, the fervour with which he fought for social equity, freedom and peace shook many consciences and promoted action and thought, both in the dark times of Fascism and in the years of democratic reconstruction. He became a builder of peace in the dialogue between people, between religious confessions, between peoples and States … He thought of Europe as a continent of peace, after having been the scene of devastating wars. He wanted his country to be a bridge. And he himself tried to become a bridge to bring people closer, connect them, recompose them”.

A sculpture dedicated to him by the artist Peter Kostner will also be inaugurated. The work, which will be placed in the garden of the International Focolare Centre, depicts Giordani sitting on a bench. In the last years of his life, in fact, he often sat on a bench in the park. During the international meetings held at the Centre, many young people and adults would come up to greet him and talk to him. And the bench became a place of encounter and dialogue. During the event some testimonies will recall those conversations in which Giordani listened with humility and patience, not sparing advice drawn from his fruitful life experience and enriched by the charism of unity.