Overshoot Day: the Earth is asking for help

The Earth’s resources for this year run out on July 29. How can we reverse all this waste? Luigi Muraca, a member of the international Focolare youth formation team, appeals to us to face the challenge. 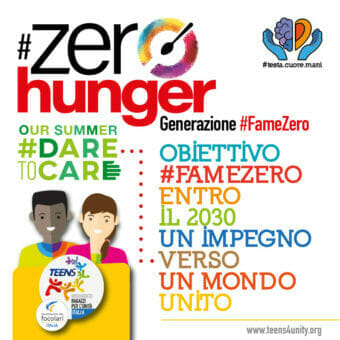 Overshoot Day is a symbollic date indicating when we, the inhabitants of this planet, have consumed all the resources the Earth can regenerate within one year. To take a simple illustration: just say there were 100 new trees growing each year, and we humans cut down more than 100 a year.. Overshoot Day marks the day we cut down tree number 101.

So from this date until the end of the year, we’ll consume more resources than we should allow ourselves. Despite this, I predict it won’t feel any different to yesterday. As you read this you’re probably not too worried about it, and I guess you’ve not noticed the people around you so far today anguished about this fact, nor the people you’re still to meet.

I just want you to know one thing: it’s not your fault. It’s not that you’re insensitive, or that you couldn’t care less about the environment or the planet. You’re not too worried because, like me, you’ve got used to this kind of news on climate crises.

And when you get used to something, you stop experiencing it as an emergency. News about the climate crisis has more or less become part of our daily routine. And there’s the real danger that getting used to hearing about it, makes us lose the will to change things. It happens to me too and that makes me sad.

But it’s not all bad news.

Not everyone remains passive in the face of these uncomfortable facts. Some actually try to change things. Here I’d like to draw attention to two projects launched by the youth of the Focolare Movement, striving to contribute to tackling the issues of ecology and our use of resources.

The first project, called PATHWAYS – People, planet and our ecological conversion is an awareness and action campaign, launched as part of the 6-year Pathways for a United World program.

In the year 2021-22, those behind the initiative – Teens for Unity, Youth for a United World and  New Humanity NGO – are launching actions at local and global level, in a three-phase program:

1) Learn – study and get informed, as a solid foundation to any action

The second project is directed at our planet’s food resources. For several years now, the youth of the Focolare Movement have collaborated with the United Nations Food and Agriculture Organization (FAO) in a shared commitment towards achieving “Zero Hunger”, supporting the goal of reducing famine in the world.

While an international team works to coordinate global activity, local actions and initiatives are underway in many local territories.