Nedo Pozzi and his bold utopia

A reflection by Anna and Alberto Friso. For decades they worked alongside Nedo in his generous and hugely competent commitment to serve the world of family life as a married focolarino. 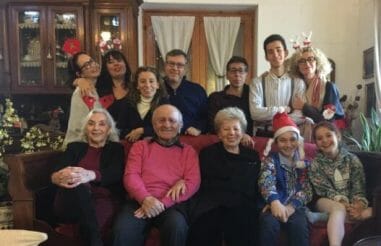 “Two driving ideas conditioned my life growing up: the need to consecrate myself totally to God and an instinctive creative love for beauty and art, combined with the unshakeable conviction that I would do something truly important with my life”. This is how Nedo Pozzi described his ambitious life-project, which he confided to us too during the almost forty years we shared at the Focolare’s international centre. Firstly we worked together in the field of “Family Life”. Then his distinctive gifts as a communicator, man of culture and of rare sensitivity, led to him being entrusted with other even more arduous and complex tasks. In 2000 he played a key role in developing a Focolare network (NetOne) for those active in the field of communications and media. Later, he was asked, with Vera Araujo, to coordinate the Focolare Movement’s dialogue with contemporary culture. 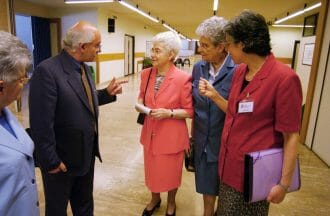 Throughout this period, he wrote articles and books for Città Nuova publishing, he contributed research for Focolare founder Chiara Lubich’s public discourses, and delivered presentations at numerous international conventions.

Nedo was born in Mantova, Italy on 6 July 1937 and grew up along the shores of Lake Maggiore. He never lost his capacity to dream bold dreams. At barely 20 years of age, he met Angela and thus began a passionate love story. Years later, at the many courses for engaged couples they animated, Nedo would candidly declare that quite obviously it was he and Angela who had invented falling in love!  They got married early one morning with only 2 witnesses present. No need for expensive tastes, their wedding banquet was two sandwiches and a beer at Milan station! In this way their life’s adventure together joyously took off under the station’s arcades, which still today evoke the feeling of a cathedral in the world.

All too soon, however, reality failed to live up to the dream and the first signs appeared of a crisis to threaten everything. At this point Nedo was introduced to Focolare by a married couple he knew. This proved to be the discovery of true Love, with a capital ‘L’. Love which gives of itself freely, a love composed of forgiveness, of living for the other person, a love with God at its root. From this moment on, the ideal of unity became the essence of their love for one another. They discovered how giving oneself to God and to their neighbors can open up the possibility for married people too to consecrate themselves to God. At separate times, both Nedo and Angela responded to the calling to become married focolarini. And this marked the fulfillment of the first of Nedo’s two yearning desires: to be all for God.

He seemed to let go of his second passion – beauty, because he couldn’t imagine how to reconcile these two apparently contradictory callings. His life became a crescendo in love as he daily dedicated himself to others and humanity. He found himself called “directly and vitally to pay in person in each moment”, as he described it. And it was precisely through this process that Nedo’s thirst for beauty became satisfied, in the discovery that Beauty with a capital ‘B’ is hiding within every neighbor, be they famous or forsaken. All of us who have been fortunate enough to be around Nedo and penetrate, through his intuitive reflections, the mystery of his and our own life, can testify that in Nedo the profound contrasting passions which dominated his adolescence have truly been reconciled.

With his departure on 12 August, 2021, after eight years of an illness which gradually eroded his intellectual and relational capabilities, we have lost a giant of wisdom and of charity, a man of profound faith and passionate openness to others. But we, like Angela and as their daughter Paola declared on behalf of siblings Pierpaolo and Daniela, will remember him as the tenderest spouse and father, loyal friend and an intellectual who lived and worked, as he himself said, to open up “a glimpse of the Absolute”.