Solidarity shared on 9/11 by Catholics, Muslims in Indianapolis (USA) continues

In the days following the terrorist attacks of Sept. 11, 2001, many American Muslims experienced an angry and sometimes violent backlash from their fellow Americans because the men who hijacked the airliners that day had been Muslim extremists.

The Nur-Allah Islamic Center in Indianapolis had multiple bombing threats made against it in the days after 9/11. So, when the Muslims of the center gathered for prayer on the Friday after the attacks, they knew that they could become the victims of an attack themselves. But they weren’t alone. 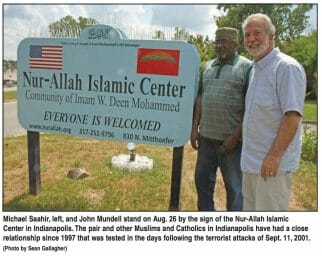 Joining them that day were some of their Catholic friends who were members of Focolare, an international lay ecclesial movement in the Church that, among other things, promotes greater unity in the broader human family. “It was a very emotionally moving experience,” said Nur-Allah member David Shaheed, who has also served as a Marion County judge since 1996. “They felt connected to us.

They felt that we were friends and neighbors. They put their lives at risk to be with us at such a historically tumultuous and scary time.” John Mundell, a member of St. Pius X Parish on 9/11, was part of the Focolare group that came to Nur-Allah on Sept. 14, 2001. “That experience was probably one of the most sacred moments of my life,” he said. “When we walked in as a group and they saw us, you could tell by the look on their faces that they realized that what we had established was real. There was nothing fake or superficial about it.” 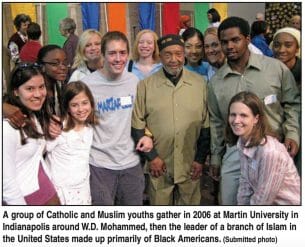 The Focolare members knew that choosing to stand with their friends at Nur-Allah after bombing threats had been made against their center potentially put their lives in danger. But their mutual relationship was important enough to them that they accepted that risk. “Our Catholic faith called us to be there with them,” said Mundell, now a member of Our Lady of Lourdes Parish in Indianapolis. “This was where the rubber met the road. In your gut, you know what the right thing to do is, but you then have to say, ‘Yes, we’re doing it.’ ” Thankfully, no attacks happened on that day. But some members of Nur-Allah so appreciated the solidarity shown to them by their Catholic friends that they joined them for Mass two days later at St. Pius X Church.

“It was reciprocal love,” said Mundell. “You reached out in love and then received this kind of wave [of love] back. It was a sacred feeling. Somehow there was the presence of God in this relationship we had established.” That relationship had started in 1997 and followed the example of Chiara Lubich, the Italian foundress of Focolare, who had reached out to W.D. Muhammed, the leader of a branch of Islam in the United States made up primarily of Black Americans.

In the years that followed the start of the relationship in Indianapolis, the members of Focolare and Nur-Allah hosted meetings of Catholics and Muslims that drew people from across the Midwest. One had taken place in Indianapolis less than two months before 9/11. But the events of that day quickly deepened their relationship in ways that they could not have imagined. “There are times when God calls us to unity through pain,” said Michael Saahir, the resident imam of Nur-Allah. That, for him, is an enduring lesson of 9/11, one that he is concerned is being forgotten as the years pass. “Too often, when the pain subsides, we forget,” Saahir said. “We tend to forget too easily. Or we don’t even take time to study the lessons that come from it. And the oneness of the human family is the main one.”

In recent years, members of Focolare in Indianapolis have become more aware of the pain experienced by their Black Muslim friends because of their race. “We’re not perfect as Americans, as Catholics in embracing this idea of universal brotherhood and sisterhood,” Mundell said. “We have a long way to go. There’s a racial aspect that we need to continue to work on and listen to.” Focolare and Nur-Allah members are making efforts so that the lessons of 9/11 and other lessons are remembered. In the months and years that have followed that day, people from both faith communities have been invited to parishes across and beyond the archdiocese and to universities to speak about their interreligious experience and relationship.

When Mundell started receiving these invitations, he began to recognize a significance to the simple personal bonds that had been created with his Muslim friends in 1997. “It made us realize the uniqueness of that relationship and that it was no longer meant for just us,” he said. “It was meant to be shared with everyone.” “People need to see a model or example,” said Saahir. “I’m grateful that our relationship with Focolare is a model, not just for Muslims and Catholics, but for anyone to see that this is doable and has longevity.” Mundell and Saahir hope that the longevity of the relationship between their two communities will continue into the next generation. “It’s like passing on your faith,” Mundell said. “The next generation has to take it on as their own. They have to have their own experience. “This is something that we’ll be doing for the rest of our lives. The relationships have to be continually renewed and rebuilt”.

By Sean Gallagher for “The Criterion”, 3 September 2021

Serving the Church in Central and Southern Indiana Since 1960