Let’s learn to say “We are unworthy servants”

Those were Pope Francis’ words to the members of the various associations of the faithful, ecclesial movements and new communities on 16th September. We asked Margaret Karram and Jesús Morán for their impressions.

It is about looking to the future while keeping our feet firmly set in the present. This is the beginning of a path of discernment suggested by Pope Francis to the members of the various associations of the faithful, ecclesial movements and new communities at the audience held on 16th September. 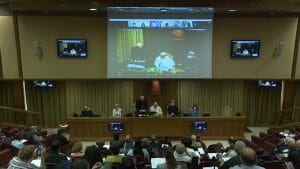 The Holy Father made a surprise appearance at the meeting with the moderators of associations of the faithful, ecclesial movements and new communities, organised by the Dicastery for the Laity, the Family and Life. Margaret Karram, president of the Focolare Movement, and Jesús Morán Cepedano, co-president of the Movement, also participated in this time of reflection on the theme: “The responsibility for governance in lay groups: an ecclesial service”.

“It was a great surprise”, said Margaret Karram, “to see that the Holy Father came right at the beginning of the meeting. He gave a wonderful talk, which was very rich in content and clarified many things. He gave a precise interpretation of the general decree that was promulgated by the Dicastery last June on the renewal of positions of governance in ecclesial movements and new communities. 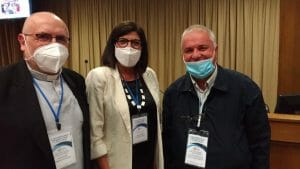 In renewing his esteem and thanks to all those present, in particular for the way each one lives and bears witness to the Gospel, the Holy Father identified Baptism as the first stage in the arduous mandate of evangelisation and apostolate of all.  Baptism is the means that “makes us priests together, in the priesthood of Christ: the priestly population”.

Pope Francis described the varied ecclesial realities as a people on the move, continually growing, which also recognises its weaknesses; a people that does not stop and is always striving for conversion. He said, “Always remember that building the future does not mean coming out of the today that we are living in! On the contrary, the future must be prepared here and now, it is “in the kitchen”, learning to listen and to discern the present time with honesty and courage, and with the willingness to engage in a constant encounter with the Lord, a constant personal conversion. Otherwise, one runs the risk of living in a “parallel world”, distilled, distant, far from the real challenges of society, of culture and of all those people who live alongside you and who await your Christian witness. The Gospel journey is not a tourist trip. It is a challenge: every step is a challenge and every step is a call from God.”

It was genuine fatherly encouragement, showing how we must be guided by docility and humility, which are necessary in order to continually deepen the charism to which we belong and reflect on the best way to incarnate it in everyday life. The Decree promulgated on 11 June this year, The International Associations of the Faithful,  goes in this direction: to accept some changes and to prepare the future starting from the present.

Moreover, the responsibility for governance in lay associations, which the Pope reflected on, upturns the pyramid or, we might say, it assembles it in the right order by placing service at its summit: “To govern is to serve. (…) Let us learn to say ‘we are unworthy servants’ (Lk 17:10). Let us keep in mind this expression that is so good for the Church and reminds us of the right attitude for working within it: humble service, of which Jesus gave us the example by washing the feet of his disciples”. 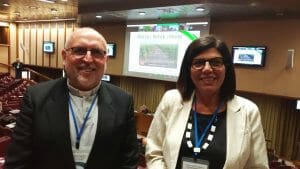 “After the Pope’s speech,” said Jesús Morán, “we can’t just read the Decree. We must read it adding the words he said this morning. It is like a small treatise on how to exercise governance in the light of the Gospel.”

“We have experienced a profoundly ecclesial event of great fellowship,” added Margaret Karram, “with some very deep contributions. In the coming months, I think we will have to study this important topic also to live our charism better”. Jesús Morán added, “We must recognise and affirm the great love and care shown by the Dicastery to the movements. Their intention is to safeguard the charisms and this was shown by the Pope, who reiterated his thanks to the different ecclesial realities present several times, especially for their commitment during this time of suffering for all humanity”.

To access the full transcript of Pope Francis’ speech: https://www.vatican.va/content/francesco/en/speeches/2021/september/documents/20210916-associazioni-fedeli.html