To Chiara Lubich the honour of the city of Grottaferrata

On 10th September the Municipality of Grottaferrata (Rome, Italy) posthumously conferred honorary citizenship on Chiara Lubich, an award that tangibly renewed the friendship between the founder of the Focolare Movement and this place she held so dear, where the first centres of the Movement were located. Margaret Karram, current President of the Movement received the plaque.

A “mother city”, a place to “gather people with different vocations into a single people”. This was Chiara Lubich’s inspiration, which led her to perceive in the area of “Castelli Romani” a fertile ground where everything could flourish and, specifically, in the city of Grottaferrata (Rome-Italy), a new home for the Focolare Movement, after her hometown of Trent and Rome.

In 1959, in Grottaferrata, a meeting room was inaugurated at Villa Maria Assunta, a beautiful house made available to the Focolare Movement by the Marquise Rossignani Pacelli, sister of Pope Pius XII. A house that soon became the heart of the Movement, the lively and fervent “Mariapolis” or “little town of Mary”. While continuing to reside in Rome, Chiara Lubich spent some periods in Grottaferrata during the years from 1956 to 1964. 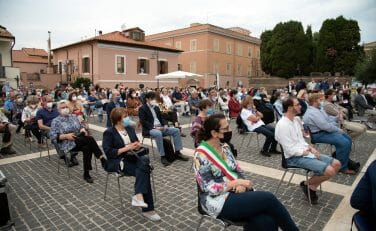 Images of a story guided by God and recalled by Margaret Karram, the President of the Focolare Movement, on the occasion of the ceremony of conferring the posthumous honorary citizenship of Grottaferrata on Chiara Lubich on 10th September. Present at the event: Luciano Andreotti, Mayor of Grottaferrata, Angelo Viticchiè, former Mayor of the city, Sergio Lubich, nephew of Chiara, and Veronica Cimmino, Mayor of Rocca di Papa. The ceremony was followed by the screening of the docufilm “Chiara Lubich: Love wins everything”. Also present were the director of the film, Giacomo Campiotti, the artistic producer Saverio D’Ercole, the producer Luca Barbareschi and the actress Valentina Ghelfi.

A sense of community and fraternity pervaded the appointment, which had already been scheduled for 2004 and then postponed due to Chiara’s illness and death. As the Mayor of Grottaferrata recalled, these values, rooted in the life of the Movement, could also become a unique “means of communion” for the public life of a city, where the “search for the common good” remains the main objective. 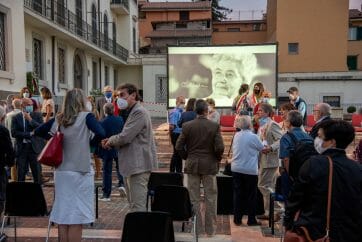 What seems an arduous journey finds its confirmation in “unity through love” and in the unpublished words that Chiara would have liked to use in receiving this recognition, which come back to us thanks to the voice of Margaret Karram: “I would like to propose the Art of Loving to all those present and in particular to the citizens of Grottaferrata so that, if they wish, we can help each other live it and spread it everywhere “.

A legacy which is for each of us and of which each, in his or her own small way, becomes the guardian, today as yesterday; an experience that, as the President of the Focolare Movement concluded, “does not stop at the borders of our cities, but extends in relationships of collaboration with other Municipalities, creating an ever brighter network of cities which give a witness of fraternity”.