Communion of thought and spirit

A conference held by the Faculty of Theology, Innsbruck, Austria that took place after several years of intellectual and existential preparation 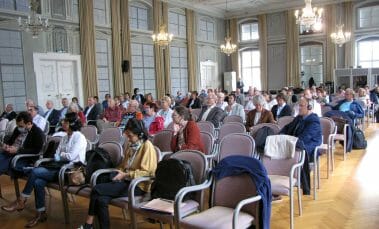 “Look at all the flowers” is an unusual title for a theological conference and, especially, in such a prestigious context as the  Faculty of Theology in Innsbruck which many people identify with the name of Karl Rahner who is buried in the large Jesuit church that divides the two wings of the Athenaeum.   It was significant that such a large number of people (about 100) attended this conference in the prestigious Leopold Saal and about 150 more were able to follow online from other continents.

This was not an isolated event but the conclusion of a journey that began almost a decade ago on the occasion of an Islamic-Christian conference organised by the Focolare Movement and based on an exchange of experiences of dialogue of life. Two professors from the Austrian theological faculty – Roman Siebenrock and Wolfgang Palaver – present on that occasion showed great interest in this experience of dialogue. In the following months, in contact with the spirituality of the Focolare, they  also visited the new Sophia University Institute and the Movement’s International Centre for Interreligious Dialogue. Hence the idea of forming a research group with academics from the two religions to explore aspects of spirituality from the two perspectives developed Since then, every year, at the end of August, this group – called cluster – made up of around twenty people from different backgrounds has met regularly for a few days. From the outset, it was not just an intellectual and academic activity but also an existential exercise that has gradually built up deep personal, cultural, religious and intellectual relationships. In recent years the group’s interest has focused on some of Chiara Lubich’s texts of a more mystiical nature. The passages, including the one that gave the conference its title, have been studied in depth from both  Christian (Catholic and Reformed) and Muslim (Sunni and Shia) perspectives. At the end of this process, it was decided to organise an academic conference to share the richness of these reflections. 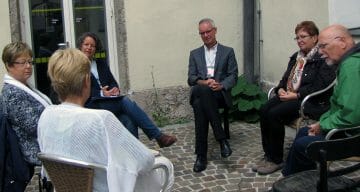 The conference that has just taken place opened up this experience to an academic public. Whilst this event was Germanic in origin –  the vast majority of the participants were  Austrians, Swiss and Germans  and this was expressed  in the style, language and categories of thought prevalent in this part of Europe – the  spiritual heritage  of Lubich was very present and was able to bring together  thinkers of different ethnic and cultural origins and both religious and non-religious people: Catholics, members of the Reformed Church, Muslims and Marxists.

Stefan Tobler, a theologian from the Reformed Tradition offered a reflection on the passage that gave this event its title. This was followed by other reflections and round table discussions from which emerged  the experiences of intellectual and spiritual communion that these Christian and Muslim academics  have been living for years.   An artist from Geneva who took part in the proceedings noted that the group who took to the stage to perform in different voices were a tangible witness to the communion among the participants. This is something that is rarely found in academia but which  characterised the conference.  It brought an important dimension: communion of thought and spirit.

Moreover, the presence of Catholics, Reformed Church members, Marxists and Muslims offered a remarkable cross-section of schools of thought and of academic but also cultural and religious sensitivities which it is not easy to find in today’s world of strong polarisation even in academic and cultural spheres.