Serbia: building a home to be a home

Although this father could finally afford to buy a house for his family, he did not have the physical ability or financial resources to renovate it himself. The community around him acted. 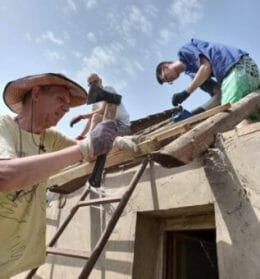 “Many people came to help me, and in three days we were able to redo the roof and replace the earth and straw ceilings with plasterboard ones.”

These are the enthusiastic words of Janos Kalman, who is Serbian and a Hungarian citizen, a father of three. There is something extraordinary about the work being done on his home.

Until recently, he lived in a dilapidated house without water in the middle of unused fields. His dream had always been to have his own property, but he could never afford it.

Thanks to an injury payout and the generosity of many, he was finally able to raise the money to purchase a home. This gave rise to another problem, however – it badly needed renovating.

“I wished I could have fixed it,” he says, “but I knew on my own I could never do it.” After an accident at work, Janos used crutches for 10 years. Lately he has started walking again, but he still can’t bend one knee. He needed help.

This is how the Focolare community got involved, putting into practice the motto ‘Dare to care’ from Youth for a United World. (See unitedworldproject.org/daretocare2021.) 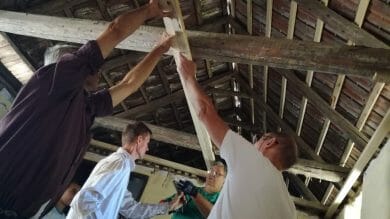 “We decided to make a list of the people who were most in need,” explains Cinzia Panero, a member of the Focolare in Serbia. “Some were in financial difficulty, others sick, and still others without a home.”

Among the latter was Janos. He says there is still work to do, “but the help I received is a great gift to me.”

One other important fact sets this story apart: Janos’ house is located in Vojvodina, an autonomous region of Serbia made up of various ethnic groups (Slovaks, Ruthenians, Romanians, Croats, with the majority Hungarian-speaking).

Some people from the Czech Republic contributed to the renovation works as well, collecting money for the necessary material and sending two volunteers to Serbia.

They did this with some care. Those who contributed financially, for example, included a personal message addressed to those receiving the amount sent. Those benefiting responded with heartfelt gratitude.

It was a gesture that helps to build a sense of family, beyond the distance – true teamwork between different cultures.

“In addition to helping someone in need,” said one of the volunteers, “I felt that I was also helping myself get out of my comfort zone.”

We can reach out to others to build a home. In doing so, we all become a home.

Watch the video of the experience