The Mediterranean: new narratives of unity

“Planting seeds of peace and seeing them blossom”. Margaret Karram’s words during the forum for dialogue entitled “Seeds of hope against prophets of doom: a partnership between Religion and Government for a new policy on Mediterranean unity” at the Rome MED 2021 organised by the Italian Ministry of Foreign Affairs and International Cooperation and ISPI (Italian Institute for International Political Studies). 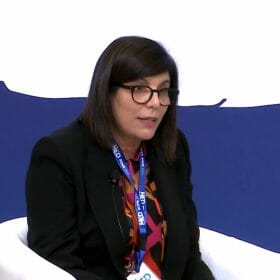 “I believe that government policies in the Mediterranean region should create a political environment conducive to pluralism and equal citizenship”. These were the words with which Margaret Karram, President of the Focolare Movement, addressed the seventh edition of Rome MED 2021 (Mediterranean Dialogues) in Rome (Italy) on 3 December 2021. “I think that religions,” she continued, “can also be part of the solution, by offering and promoting a different narrative. (…)  Each of us has our own narrative, and we have to listen, understand and respect the other person’s narrative”.

The event, which took place in Rome from 2 to 4 December 2021, is the annual high-profile initiative promoted by the Italian Ministry of Foreign Affairs and International Cooperation and ISPI (Italian Institute for International Political Studies).  It brings together politicians, academics, entrepreneurs, religious leaders and NGOs to discuss opportunities offered by the Mediterranean and how to address the many crises across and around the Mediterranean.

Margaret Karram’s speech was part of a panel discussion entitled “Seeds of hope against prophets of doom: a partnership between religion and government for a new policy on Mediterranean unity”. The discussion, moderated by Fabio Petito (Head of the Religions and International Relations Programme at ISPI) and Fadi Daou (Co-founder of the Adyan Foundation), was attended by Marina Sereni (Deputy Minister for Foreign Affairs and International Cooperation in Italy), Noemi di Segni (President of the Union of Italian Jewish Communities), Azza Karam (Secretary General of Religions for Peace), Monsignor Miroslaw Wachowski (Under-Secretary for Relations with States of the Holy See) and Haya Aliadoua (Advisor to the Secretary General of the World Muslim League).

The panel’s reflection on the crisis of disunity that for some time now and for various reasons has affected the shores of the Mediterranean, the scene of clashes between various cultures, moved the debate along and simultaneously left space for possible initiatives and greater involvement from religious leaders and communities in public life to promote new pathways towards fraternity and peace.

“Just yesterday,” said Margaret Karram, “Pope Francis having recently arrived in Cyprus, stressed that the ‘mare nostrum‘ – as the Romans called it – is ‘the sea of all those peoples who border it, in order to be connected, not divided’[1]. I believe this is the Mediterranean area’s true identity”. Thinking of the Mediterranean not as one continuous crisis but as an opportunity to work in an effective way, Karram continued: “As Focolare we have been present in the Mediterranean region for over 50 years.  Bringing interreligious commitment into daily life, helping people with their needs in concrete ways, is the lesson we have learned and which we strongly value; I believe that high level strategies don’t have such a profound impact”.

Speaking of concrete initiatives the Focolare President presented a number of examples and testimonies from Lebanon to Syria that demonstrate the importance of putting the person at the centre and taking care of relationships and diversity, and underline the part that religions can play in this field. “Love and caring for every human being are the core of this message,” she concluded. “Religions have the natural ability to network and draw people into a space where we can plant seeds of peace, seeds of hope, and see them flourish”.

[1] Pope Francis, Meeting with the authorities, civil society and the diplomatic corps –