The Ecclesial Assembly was an unprecedented experience for the Church in Latin America. It was an amazing experience which involved the whole People of God in a process that culminated at the end of November. It is ongoing in the effort to implement the priority pastoral guidelines that emerged.

“We lived a true experience of synodality, in mutual listening and in communitarian discernment of what the Spirit wishes to say to his Church. We travelled together, recognizing our multifaceted diversity, but above all what unites us and, in dialogue, our disciples’ hearts looked at the reality that our continent is living with its pains and hopes”. 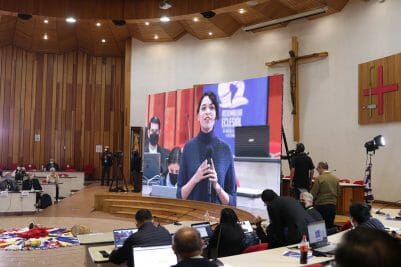 These are the words of the 885 members of the Latin American and Caribbean Ecclesial Assembly, which took place from 21st-28th November in a blended virtual and personally present way in Mexico, with representatives from all the countries of the American continent.

Susana Nuin, a Uruguayan focolarina, coordinator of Cebitepal, the Training Agency of the Episcopal Council of Latin America and the Caribbean (CELAM) commented, “On 24th January 2021, Pope Francis opened this first ecclesial assembly, inviting all the Holy People of God to participate: Cardinals, Bishops, Priests, men and women Religious, Lay People, all generations and all cultures”.

It was a journey that involved all the dioceses, parishes, communities and movements, in a period of “listening”. 70,000 collective or individual responses were received, that will be compiled into a book. The broad lines that were worked on in the various groups derived from this material.

Susanna continued, “In my opinion, the groups offered a very interesting space, due to the commitment and interest of the participants. We worked non-stop for 3 hours at a time, with a great freedom of expression and hunger for change”.

Sandra Ferreira Ribeiro, a Brazilian focolarina, co-responsible for Centro “Uno”, the Focolare’s Secretariat for dialogue between Christians of different Churches, said, “For me it was a real experience of synodality. Every day, in the working groups, there was a different question to be discussed on the basis of the topic that was dealt with in the first part of the day. There were 14 people from different countries, vocations and ages in our group, all connected via zoom. First of all, we listened to everyone’s thoughts, then we tried to prioritize what had emerged and give a summary “. 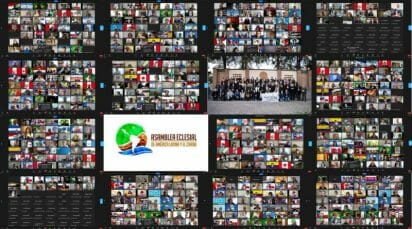 It was an intense and effective process, interspersed with short breaks, which at times were even neglected in order to continue the dialogue and be able to give some personal reflections to the coordinating team. The telematic means allowed a greater participation despite the limit on getting to know one another, that kind of contact that occurs spontaneously in the “corridors”, in the breakss and which also a is part of synodality. The moments of prayer were very well prepared, the Religious had a great hand in this this. They expressed the different cultural contributions with symbols and musical expressions always based on the Word.

As in every synodal journey, there was also room for dissent and for the exchange of different points of view. At times these were divergent but they never led to clashes or ruptures.

A conscious decision was made not to produce a final document, because there is still a lot to put into practice from the Aparecida document (2007). Furthermore, this Assembly is only one step on a path that must and will continue. Instead, a message was sent to the whole People of God of Latin America and the Caribbean, expressing the challenges and priority pastoral orientations which had emerged, ranging from a new impetus as an outgoing Church to the leadership of young people; from the promotion of human life, from conception to natural death, to formation in synodality. Challenges that include listening to and being close to the poor, excluded and rejected, with the aim of rediscovering the value of the indigenous peoples, inculturation and interculturality; priority to the implementation of the dreams of “Querida Amazonia”[1] for the defence of life, the land and the original and Afro-descendant cultures. Last but not least, to give careful attention to the victims of abuses that have occurred in the ecclesial context and to work for prevention.

The guests included Cardinal Marc Ouelet, Prefect of the Congregation for Bishops and President of the Pontifical Commission for Latin America, Cardinal Mario Grech, Secretary General of the Synod of Bishops, representatives of the regional Bishops’ Conferences. They all followed the proceedings with great interest.

Sandra concluded, “It was a privileged moment in which to be able to meet the Church of Latin America. In my group there were Bishops, Priests, Religious, Lay people. I met the Church in its members, in the people who expressed their anxieties and concerns. It was exciting to see the living, dynamic Latin American Church and its desire to progress fraternity, the Kingdom of God; its desire to truly bring Jesus to everyone “.

[1]“Querida Amazonia” is a 2020 post-synodal apostolic exhortation from Pope Francis in response to the Synod of Bishops of the Panamazónica region held in Rome in October 2019.