Catholic Action and Focolare Movement get together, starting from local Churches, in education and for integral ecology. To “live” the present and the future of our neighbourhoods together and in a practical way.

A partnership agreement was made between the Italian Catholic Action (CA) and the Focolare Movement (FM). An alliance that, as Giuseppe Notarstefano, National President of CA underlined, combines the foundational value of a partnership that will become ever more concrete through the importance of appreciating one another, of acting together. The third meeting between the Presidency of the Italian Catholic Action and that of the Focolare Movement took place on Friday, 13th May  in Rome, at the National CA Centre in Via Aurelia.

Recalling the words spoken by Chiara Lubich, founder of the Focolare, during the bombings of Trent during the Second World War, “Love conquers everything”, Margaret Karram, President of the Focolare Movement, underlined the mutual desire of a partnership that, believing in this certainty, is able to realize the projects and dreams of the two organizations, to be ever more and together, a gift for the Church. 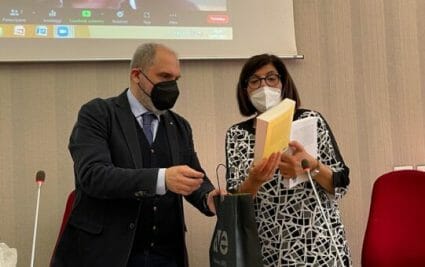 Following two hours of prayer, getting to know one another, discussion and dialogue, it was decided that the FM and CA would initiate and consolidate projects at a local level in various places, starting from the dialogue that comes from life, to restore strength and momentum together with local communities and work in a partnership that is increasingly concrete and intergenerational, which promotes kindness, tenderness, as a way of being and being together, as desired by Pope Francis in the encyclical All Brothers (Tutti Fratelli).

President Notarstefano expressed the desire to concretely “live” together in the various places, ensuring presence and passion in the networks of dialogue in the local Churches, encouraging and supporting each other to live this path of concreteness, patience and dedication. It is important that, in the current scenario of general disorientation, places of fraternity are created at grassroots level, which, in the storm of what is happening around us, become boats to which people can cling.

We wish to testify that working together is possible, in order to generate fraternity, also through a joint, national symbolic initiative that gives value to those who strive to build a greater “we”, in education, for integral ecology, to participate together, also in politics, in a generative path open to other realities, which is an investment in the service of future generations, for the promotion of the person.

Margaret Karram, President of the Focolare, said that the commitment to come together in different cities, will bring out the many different concrete actions that can be carried out in the local Churches. To this end, a working group was set up, which will be coordinated by Michele Tridente (CA) and Patrizia Bertoncello (FM), to evaluate the proposals that emerged from Friday’s meeting and consider possible ways to collaborate, through which the two organizations will be open to other realities, to contribute to growth in the various areas and local communities.