A youth competition dedicated to the young girl from Sassello, Italy, beatified in 2010. The jury, headed by Chiara Luce’s mother, Maria Teresa Badano, will vote on artistic submissions in two age categories: 10-16 years and 17-35 years. The award ceremony will be held on 29 October in Sassello. 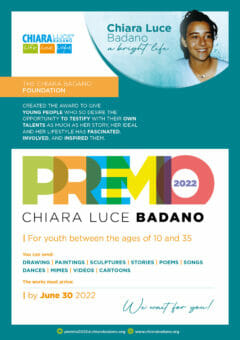 Applications are open for the Chiara Luce Badano Prize, dedicated to the young girl from Sassello, Italy who was beatified in 2010. The competition invites young people from 10 to 35 years of age, to express through the arts how they have been inspired by encountering Chiara Luce, whose brief life is an example to thousands of young people around the world today.

A young woman in love with God. Chiara Luce Badano was 17 when she was diagnosed with a bone tumour, but the infinite love for God was stronger for her. “For you, Jesus. If you want it, I want it too!”

She had received a letter from Focolare founder, Chiara Lubich, proposing, ‘Chiara Luce is the name I thought of for you. Do you like it? It is the light of the Ideal that conquers the world…’

Chiara Luce left this earth on 7 October 1990, at the age of 19, with these last words, “Be happy, Mamma, because I am”, the culmination of suffering lived in the radiant light of faith.

In 2018 the Chiara Badano Foundation unveiled the “Chiara Luce Badano Prize”, to promote artistic works inspired by the life and existential model of Chiara Luce, in order to sustain and spread awareness of who she is and her story, and propose her as a model of life for many other young people.

Young artists can express all their creativity through visual arts, poetry, story-telling, songs, dance and other forms. All entries must reach the jury by 30 June, as indicated by the rules and directions contained in the prize regulations.  The highly qualified jury members, headed by mamma Maria Teresa Badano, will vote on two age categories: 10-16 years and 17-35 years. The 2022 prize will be awarded on 29 October in Sassello during the annual liturgical celebration, when the winning artistic work will be displayed or performed.

Full information on the Prize is available on the Chiara Badano Foundation website, where you can also find details of the life of Chiara Luce, known around the world, through video, witness testimonies and photographs. There is a detailed list of the ever growing number of publications covering her life and the Ideal of Chiara Lubich which Blessed Chiara Luce made her own.