“We are commited to verifying the ecological sustainability of our structures and activities … We are dedicated to the creation of greater environmental awareness that will lead to more sustainable lifestyles.”  Ecological conversion was one of the goals set by the Focolare Movement in the 2021 General Assembly. In response to this urgent need, the Focolare EcoPlan was initiated.

“The Focolare Movement is deeply committed to ecological conversion through concrete actions and by fostering dialogue with all for the protection of our planet,” said Margaret Karram, at the opening of the fifth Halki Summit a few days ago. “Stimulated by our General Assembly at the beginning of 2021, we have decided to take courageous action through the creation of an ecological plan within our communities to bring about change and make our lives and our activities more sustainable.” 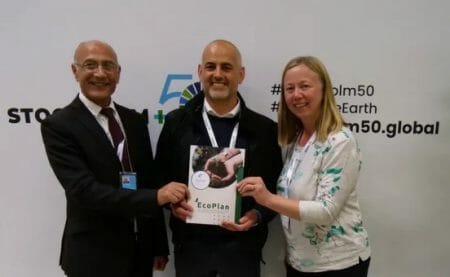 In fact, on 3 June 2022 in Stockholm, acting on behalf of all its communities, the Focolare Movement was able to present its own document – Focolare EcoPlan – which demonstrates its  commitment  to the environment. The presentation of EcoPlan was motivated by the spirituality that has given life to the Movement. It was officially handed over to Iyad Abu Moghli from Jordan, UNEP Senior Principal Advisor and director of the Faith for Earth Initiative, who said that the EcoPlan is “an ambitious and comprehensive ecological approach.”

Through EcoPlan, the Focolare wishes to extend, connect together and expand the environmental work that already exists within the Movement. Referring to the various aspects of the spirituality of unity, EcoPlan, which has been produced in partnership with FaithInvest and EcoOne, aims to inspire Focolare  members and communities  to re-examine their lifestyles in relation to the protection of people and the planet.  It also represents a public declaration of ecological commitment, now and in the years to come, as a response to the objectives

expressed by the last Focolare General Assembly. It was presented at the 50th anniversary of the United Nations Environment Programme (UNEP) on 3 June 2022 in Stockholm along with other similar proposals from organisations that are part of Faith Plans for People and Planet. These include the plans that the Laudato Sì Action Platform has been collecting over the past year following the historic meeting with the Pope and other religious leaders on 4 October 2021 at the Vatican.

To help the Focolare Movement’s  local communities to develop ecological plans suited to their environment and culture, the first step was to initiate the Seed Funding Programme.  Faithinvest provided financial support for this. Further projects can be submitted until 30 June 2022.

Fifty years ago, the United Nations Conference on the Human Environment was held in Stockholm. On that occasion, for the first time, it was stated that, in order to sustain and improve living conditions for the benefit of all,  natural resources had to be protected and international cooperation was required to achieve this goal. Emphasis was placed on solving environmental problems but without forgetting social, economic and development needs. Soon afterwards, the United Nations Environment Programme (UNEP) began. It was based in Nairobi, Kenya.

For 50 years, UNEP has coordinated a worldwide effort to address the planet’s greatest environmental challenges. Its convening power and rigorous scientific research have provided a platform for countries to engage, act boldly and advance the global environmental agenda.

“We ask too much of our planet to maintain unsustainable ways of life,” said UN Secretary-General António Guterres. “History has shown what can be achieved when we work together and put the planet first.”

In early June 2022, the Stockholm+50 Conference was held.  It was a time of reflection and relaunching  for ecology and care for the planet. In this context, the world’s great religions wished to express their commitment to the planet with an interfaith declaration addressed to the Stockholm+50 UN international gathering. More than 200 religious leaders and representatives of the world’s religions – including New Humanity, representing the Focolare Movement – called upon the UNEP meeting to ensure that ecocide or destruction of the environment  be considered an international crime since it attacks human life. They asked that there should be criminal consequences for those responsible: therefore, such a move would  be a deterrent and have a preventive effect.

Through New Humanity’s accreditation as an advisor to UNEP, the meeting in Stockholm was attended by Nausikaa Haupt and Christine Wallmark who are both Swedish and Nino Puglisi who is Italian but lives in Vienna.