Since 2017, in lands confiscated from the mafia in San Vito dei Normanni (Puglia- Italy), “XFARM Agricoltura Prossima” has hosted training camps organized by “Libera”, a network of Associations, involved in a commitment against the mafia and in favour of social justice. This year, some young people from the Focolare Movement took part. 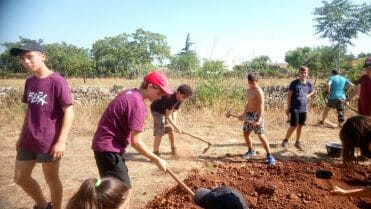 You see them handling the red earth of Puglia, in southern Italy, you observe them knead it with straw, you watch them shape the material to create something ecologically sustainable. And you think that what they are doing also has the force of a metaphor.

They are aged 13-17 years old. They met in San Vito dei Normanni, in Brindisi, to contribute to the rebirth of an asset confiscated from the mafia gangs. They are mostly children of this land caressed by the sun and at this time of year, invaded by tourists. But they also come from Piedmont and Lombardy, where some people think that the mafia is only something to do with southern Italy. Not these young people. They came down here to Upper Salento to spend part of their holiday in a different way and to make a contribution to change. There are twenty of them, full of the energy and fun-loving, typical of their age. They’re spending 4 days here, protagonists in a project organized for them by Libera and the Focolare Movement. 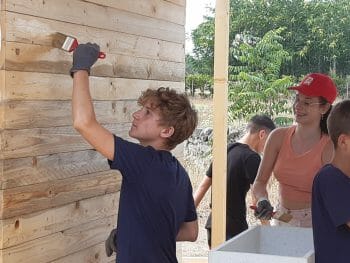 For a few hours a day, they work in the fields of social cooperatives that manage 50 hectares of olive groves and other structures taken from the “bosses”. And in their genuine commitment, you can perceive a desire to get their hands dirty, to roll up their sleeves, to actively bring something new, even in a land marked by the arrogance of the mafia. “This is our land, given back to the community”, they seem to say, as they work with clay, sand and silts to build wooden structures designed for a society in which everything can be circular. To guide them, the young people of the “Ex Fadda” urban laboratory and the “XFarm” project, a handful of enthusiasts of civil economy, active citizenship, and good practices in agriculture who after various experiences around the world found themselves here, in the land where the United Sacred Crown once ruled, to experience a new model of coexistence, to try to realize the dream of communities actively involved in regenerative processes. 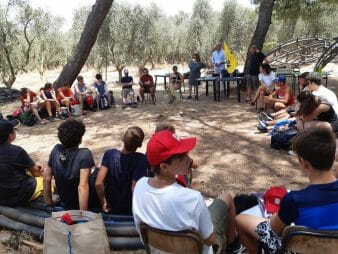 A utopia created here, a stone’s throw from the wild beauty of Torre Guaceto (Brindisi, Italy), thanks also to the “strength of the We”. Many different associations, secular and Catholic, trade union forces such as the Italian General Confederation of Labour, contribute to provide a common ground wherein to engage with the construction of a more united society, more attentive to preserving the environment and to working for social justice.

“Memory is hope, commitment, it is something that characterizes us and pushes us not to repeat the mistakes of the past”, say the children, when the “E! State Liberi” project managers encourage them to reflect on that concept so central to the history of the network of associations created by Don Luigi Ciotti.

Memory that becomes alive with the touching testimony of the Fazios, a couple whose son Michael, the same age as the listeners, was killed at the age of sixteen in the alleys of Bari Vecchia because he ended up in the middle of a settlement of accounts between gangs with which he had nothing to do. “Io stoc do”, “I’m here”, Lella says today, as she proudly did before to the wives of the mafia bosses who thought that after the murder they would leave the neighbourhood and the city. They remained, to obtain justice, to identify and then grant forgiveness to those who killed Michael, but also to try to offer a different future to that region of Italy, stained with the innocent blood of their son. “We are here”, repeat those fresh faces who today work in the fields, taking a stand to remind us that a better world is still possible. Just start by taking some land and try to do something worthwhile with it. One mother, when her son returned home after the camp, said, “I saw a light, a brightness in his eyes that I have never seen before. He told me that he had never experienced anything like this before”.