You are in: Home > Il Papa e la famiglia > Family: the joy of love 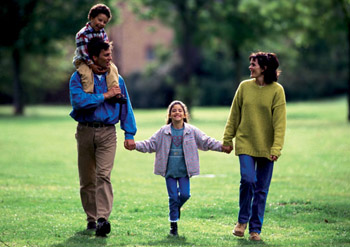 After the two Synods on the family, Amoris Laetitia finally announces the ideas of the Pope, this Pope. He is the Pope of mercy, who gathers the approval of those who declare to have “closed” their relations with the Church, or who do not profess any faith. The recent exhortation, set out in over 100 pages, really responds to the expectations of those who hoped in change – very evident on the pastoral level. The doctrinal one has remained unchanged – also for those most bound to tradition. It is a reaching out to all, also to those who find themselves in a so-called “irregular” position. For Pope Francis “no family is a perfect reality and packaged once and for always, but requires a gradual growth of its own capacity to love” (AL 325), as if it aims to remove the tendency to distinguish between ”regulars” and “irregulars” and wants to underline that nobody is condemned and excluded beyond repair. The most significant opening of Amoris Laetitia is certainly intended for the divorced who have remarried, which provides a path of growth in the capacity for discernment, accompanied by pastors or as also cited, by “lay persons who live in the service of the Lord” (AL 312) aware that they are called to “form consciences, and not replace them” (AL 37). It is a path which in certain cases, as stated in the 351st note of the exhortation, could lead also to access to the sacraments, since, the Pope underpins that the Eucharist “is not an award for the perfect, but a generous balm and a nutriment for the weak.”

But if the media’s attention is caught precisely by these ‘openings’ to the remarried, it is 4 and 5 (on the beauty of the family that draws inspiration from the Trinitarian design and nurtures on that charity St. Paul spoke about in Cor 1,13) that its merit goes beyond. The centrality of the life of the couples is presented here as never before: “It is the direct encounter face to face with a “thou” who reflects God’s love and is man’s best possession, or as the spouse of the Canticle of Canticles exclaims in a stupendous profession of love in reciprocity: ‘My beloved is mine and I am his. I am my beloved’s and my beloved is mine.” (AL 12-13).

«…we often present marriage in such a way that its unitive meaning, call to grow in love and ideal of mutual assistance are overshadowed by an almost exclusive insistence on the duty of procreation.» (AL 36). We need a healthy dose of self-criticism, in our attempt to valorize the eros imbued in creatures, showing marriage in its concrete reality as a “mixture of joys and struggles, tensions and repose, suffering and liberations, satisfactions and longings, and annoyances and pleasures. » (Al 126). Every moment of daily life is highlighted, overcoming the contrast between sacred and profane, and between solemn and unimportant events, since nothing is secondary in the eyes of love and faith.

The Pope also takes into account the longer life spans and the initial decision of the spouses that has to be daily renewed» (AL 163), in a continual regeneration and change as each progresses along the path of personal growth and development: «There is no guarantee that we will feel the same way all through life. Yet if a couple can come up with a shared and lasting project, they can love one another and live as one until death do them part, enjoying an enriching intimacy.» (AL 163).

Thank you Pope Francis! We really needed the loving care of the Church which continues to present to spouses the high ideal and model of the Trinitarian harmony which has never been reached, and also for the fraternal hand of the Church which stands by all of us, without rejecting anyone.