You are in: Home > News > The Healing Power of Love 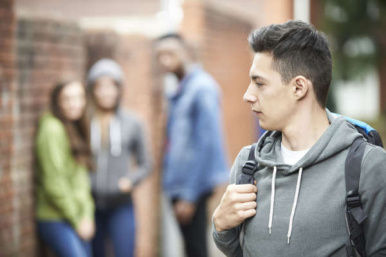 John: “At the beginning of the school year, our son came home after his first day in year 11 and said to my wife that he was not returning to school – he said that he couldn’t stand people! He disappeared silently into his room for over a year, coming out only when he thought we were asleep. He withdrew from me entirely and only talked to his mother sporadically. I felt completely abandoned and lost, but Claire’s love managed to help me accept the rejection. What helped me was the phrase of the Gospel: ‘As I have loved you, so you must love one another’ (Jn 13:34).

One night he made a desperate decision to commit suicide. As we called for an ambulance, he climbed out a window and ran away. The next hours were a blur: the ambulance arrived but he was gone; police support came too. He eventually came back and he was rushed to hospital for treatment.

A week in hospital intensive care for someone stricken with panic and terror of people and spaces is a pretty scary thing. Night after night, and day after day, we slept in shifts so one of us would be there whenever he woke up. That ‘night shift’ was the only concrete love I could offer him; I could at least be a presence if needed – something I know that he later understood.

When he came home, we thought that we could keep up that 24 hour suicide watch, but pretty soon had to accept that this was humanly impossible. We prayed together in a new way seeking God’s will. Together we offered and entrusted to God our son – His son – accepting completely that we could not prevent him trying to commit suicide again. I well remember the fear, pain, emptiness, anguish and hopelessness of this time, and then, in my acceptance of this terrible role, the feeling of real union with God and with Claire.

In the year that followed, we managed to get him to reluctantly agree to enter a day therapy program. We hung in with our background support role and I think that God did the rest from the mundane of our ever-extending health insurance cover, to the miraculous – of an incredible group of fractured kids who supported and lived for each other.”


Claire: “One of the girls in the group, with her multiple challenges, not the least of which was drug addiction, became part of our family life, and, as time went on, she and our son grew closer together. She hung in with him and helped draw him through his anxious times. And he stood by her rugged attempts at drug withdrawal. But it wasn’t easy.”

John: “Their relationship suffered a setback due to our son’s stand on drugs, his personal abhorrence of them. But slowly, over the period after release from her months of involuntary hospitalisation, they tried again and worked at rebuilding their relationship on a firmer ‘no drugs’ foundation. Eventually they decided to marry.”

Claire: “But, as everyone knows, wedding preparation is a pretty stressful experience, and our soon-to-be daughter-in-law was still working in an environment where drug taking was a common way to cope with life. So the inevitable happened. Our son rang me a month before the wedding and said bleakly, ‘Mum, she’s on ice again*. What should I do?’ My heart fell through the floor, and my brain went blank. Then I said, ‘I can’t tell you what to do – only the two of you have the grace for that. But I can tell you that, if you look into your heart and you see that you have loved wisely to the very end, then that tells you that it’s time for your part to finish. But if you look into your heart and you see that there is even the smallest bit more of loving wisely that you can give, then you keep trying.’ There was a long, long pause. Then a big, sad sigh. And he said, ‘I guess I can love a bit more’.

Eventually they found a place that allowed her to have an extended live-in rehabilitation program with its associated outpatient support systems.

It’s now 14 hard months down the track, and she is still clean – a tribute to her continuing efforts in working with her counsellors, fuelled by her incredible love for her husband – our son – in his ‘no drugs’ stand, as well as to his extraordinary love for her through all their struggles. We’re so proud of both of them.

It has been a long road for all of us. And I guess one that we’ll all travel or the rest of our lives. But what I have seen shining through all the tears is that God’s love for John and me gave us the wisdom and strength to love our son in the way he needed to the end, and that maybe our love showed our son the way to love his wife in just the way that was right for her.”