You are in: Home > A family in the midst of so many challenges 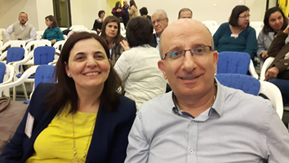 JOSEPH: We’ve been married 22 years and have three children. We are Lebanese but we attended the University of Camerino in the Marche region. During the second year, the boarding school where we had accommodation had to close for 4 weeks in view of the Christmas holidays. We were worried about what to do and where to go because we didn’t have a place to sleep. By chance, a boy at the school that we had just met heard us talking; after a few days he told us that his parents could accommodate us during the holidays.
Despite many challenges and certain prejudices from some people, they hosted us and made us feel as if we were really part of their family. This boy also made many sacrifices to save money and help others (for example, he would walk and not take the bus while we bought a bus pass) and we did not understand why he did all this.
After a long time, we learned that he an d his sister were part of the Focolare movement  . In that period , they showed us with their way of life how love and universal brotherhood can be lived concretely and not just in words. We were very impressed.
When we returned to Lebanon, we kept this extraordinary experience deep in our hearts. In 2000 I changed my job and there I met someone who, I discovered after some time,  was a married focolarino.  Gradually we met other people from the Focolare Movement and  I understood that this was not happening by chance and so our Lebanese adventure began. Our way of life started to change: as a man with a somewhat masculine mentality who did nothing at home, out of love I started helping my wife. At first I was ashamed of what my neighbours might think when they saw me hanging out  clothes, for example, etc… Then I didn’t think about it any more, because love is stronger.
Another example: I’d always thought that if Shaimaa and I didn’t agree on something, even if we had first discussed it, my opinion had to be respected in the end. Now I’m ready to lose my point of view and I’ve seen that Shaimaa does the same too, in order to reach a point of harmony and sharing that saves our unity.

SHAIMAA: Although I grew up in a practising Christian family, the Charisma of Unity has increased my faith with a concrete love for my husband, for every member of my family and every neighbour. From being a person who easily got angry, and who raised her voice with her children because she had a thousand things to do, I found myself little by little,  able and willing to be a person who welcomes, listens and understands. So I learned to create a void inside myself so as to listen and share what the children live. For example, before when Yara, our eldest daughter, came back from school and I came from work, she wanted to talk, share her day with me, but I wanted to do the housework. So she would talk a little, but then she would leave dissatisfied. After a while, through confrontation and the help and  sharing with the other New Families, I understood what it means to love. Now, when Yara arrives home and I feel she wants to talk, I leave the many things I have to do and I listen to her with my heart, with my eyes, with all of myself. Little by little or relationship has changed , and she has opened up to me much more, because she has felt loved and listened to  (of course, I loved her before, but I didn’t know how to put this love into practice).  The same thing has  happened with the other two children. My attitude has also changed a lot at work. I work as a pharmaceutical inspector for the Ministry of Health and I go to do checks in pharmacies and hospitals. When I went to do an inspection,  it was said about me: “The hard and rigid inspector came from Beirut”, that is, the one without a heart. Now things have changed and, while continuing to apply the law and the rules, my way of treating and seeing others has changed.

JOSEPH: We have experienced that the Ideal of unity has transformed our lives, our attitudes. Now we generously offer to lend a hand at the Mariapoli, at Congresses, even before they being asked,we are willing to lend our time and our energies. At a certain point we felt that we should particularly  commit ourselves to accompanying families in difficulty ,  and for this reason we followed a three-year training course. In fact, we thought that what we had received we should not keep for ourselves, but we should take this love out of just our family and give it to many.
In our parish, the  priest wanted to create a group of parish families. At the first meeting we were 10 couples, and the couple responsible for the diocesan committee for families was also present; the next day this couple called us to ask us to represent our parish on the diocesan committee;at the same time the parish priest asked us to do the same thing. I replied that we were very happy with the proposal and that we would be willing but that I personally could not do so because, being Greek-Orthodox, I could not represent a Maronite Catholic parish in the diocese. They insisted, saying: “You have impressed us; we feel that there is something  special between you and Shaimaa”.  Thus, we have understood that this impression comes from this Ideal of Unity that we live and bring to others, many times without saying a word. After some time the Parish Priest asked us to take part in the parish council and, a year later, we were asked to take responsibility for the groups of parish families by the Diocesan committee. Now in the Diocese we help couples who are preparing for marriage.

SHAIMAA : We have dedicated ourselves  to the world of the family that is so close to our hearts and we are sure that all this is the fruit of the Ideal that has changed our lives.

A year ago we were asked to be part of the Christian-Islamic dialogue committee  ; we try to do our part well because we believe in the unity of the world and that we are all brothers and children of the same Father; no matter what religion or creed we belong to. As a member of this committee, we have become better acquainted with the Muslim religion, and this has led us even more radically to live our faith and the Gospel, which calls for the unity of the world, as Chiara Lubich always said.

We feel that God gives us strength and He is our guide. Over time, our worries about so many things have diminished, because now we know how to live the present moment better by saying to Jesus: “Show us your will”. Thus, life in our family, even in the midst of so many challenges, has become simpler and more beautiful.

Economy is a Greek word that directly refers to the home (oikos nomos, rules for running a house), on the family

Sofia and Pablo from Argentina tell their family and work experiences.

We dream of a world in which no-one is in need. A world in which everyone has the opportunity to develop to their full human potential, materially and spiritually.
We know the world starts to change when we change ourselves. We recognize that we can be the change makers.
Working towards a society where nobody is in […]