You are in: Home > No-one will ever separate my family 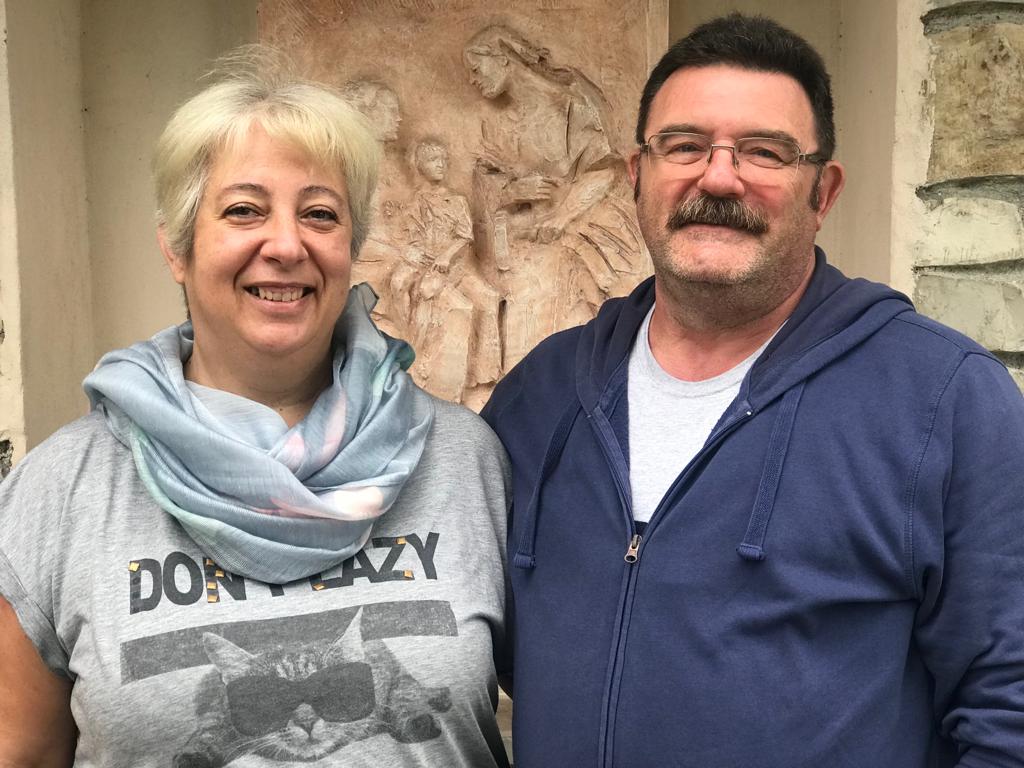 The first time I saw Oreste, we were leaving for a holiday with the families from the Church Oratory. I can still see him, leaning on  the lamp pole, like a vision! A beautiful, blond, blue-eyed boy, all dressed in jeans, with an athletic physique,” says Luisa.  At that time, she was fourteen years old and her parents had been separated for a long time: “I wanted my own family to fill the gap in me with love. I used to say to myself “No-one will ever separate my family”.

During that holiday, Oreste was always surrounded by many girls, like “a swarm of bees around honey” and for this reason Luisa immediately gave up getting to know him. “Every morning, when he entered the breakfast room, I looked down, I couldn’t stand the effect he was having on me, and I didn’t want him to see me blush.” In fact,  Oreste tried every day to say hi to the girl who didn’t hang around him like the others. She didn’t seem interested in him and that’s why she intrigued him. So, one day, he approached her and tried to get to know her.

“We played ping-pong! He was nice, kind, and I could tell he was interested in me and that filled my heart with so much joy. During that vacation he asked me if I wanted to be his girlfriend and, on the day of the Feast of the Assumption, we had a kind of first kiss,” recalls Luisa.

Their story continued when they returned from  the holiday but when her father saw them together, he forced them to separate: “You go this way, and you go that way…” he told us, pointing out two opposite ways to go!

Luisa and Orestes lost sight of each other for a couple of years. She started playing in the village band, she met another boy much older than her, but again her father pushed them apart, taking her out of the band: “I was so sad! At that point, I felt so low. I remember that one evening in September, my mother suggested that we go to the Parish dance together. I accepted out of love for her , to make her happy.” And there, surprisingly, thanks to a friend, Luisa met Oreste again: “We found ourselves alone just talking, and he, out of the blue, asked me “what are you doing tomorrow?”, and I answered”I am coming to mass” … Even though it had been a lifetime since I had been there! I was 17 and he was 20. After three years we got married.”

The years went by, to be precise, seven years. “As per script, with the seventh year, we had a very strong crisis; I felt like I was attached to him like a mussel and had no identity, no space, he had abdicated my will. Who was I? ? Everything was a crisis, the conclusion; I was wrong to get married!”. Orestes, for his part, did his best, even though he was suffering, he let Luisa go free. They went to a lawyer, he left their home. It seemed to be all over.

“I had wanted to be free from the bonds that held me captive but now I had nothing left and I was desolated. I asked God for help: “If you are there, help me…”, I said.  Only God could help me, but what kind of relationship could I have with this God?” From that cry for help, Luisa rediscovered the power of prayer, and that God who had felt so distant, in some way, now began to feel close and present in her life. There was room for Orestes again and hope for their marriage.

“When we went to the marriage counsellor’s office, it felt like I was marrying him again: this time it was a real marriage, finally free from my needs. I realized that I had needed to go through this “narrow door” to build everything on a rock..  We had built on our emotional voids before…”.

After some time, they met the New Families Movement, and they had a baby boy to add to their two little girls . The network of the families supports  them, their story has become a gift for others: “Ours is an experience forged in pain. We feel that we understand when someone tells us that he no longer feels anything for the other person.. we can recognize this state as part of our experience. But we have experienced that you can rise from it!”

And the Loreto School?
“We got here  in September, after 37 years of marriage. In the last two years we have seen how God has opened the way for us to get to Loppiano. And now we are living this experience of openness, which puts the world in your heart, so satisfying! Really, as someone told us: one city is not enough for our family! ».
(source: www.loppiano.it)

The Loreto School, the freshness of the first 40 years.
This year five families from four continents are attending the school, which was inaugurated by Chiara Lubich, who also indicated the name “Loreto”. Since 1982, 500 others have participated, while almost 1,500 families have stayed for shorter periods.