You are in: Home > Amoris Laetitia – Part 8 – Sign and an instrument of God’s love for mankind

Christian Marriage:  a sign and an instrument of God’s love for mankind.
The family was created by the Father and redeemed by Jesus.
For the Pope it is fundamental to turn your eyes to Jesus to find the vocation of the family in Him:
“Natural marriage… is fully understood in the light of its fulfillment in the sacrament of matrimony:  only in contemplating Christ does a person come to know the deepest truth about human relationships” (AL 77). 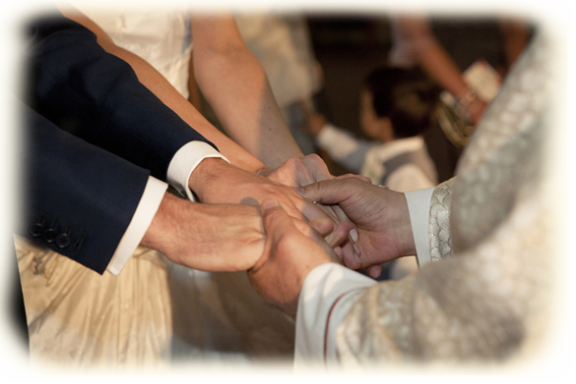 In Him the covenant of the spouses becomes a sign and an instrument of God’s love for Mankind and of the love of Christ Spouse for his spouse:
“Jesus, who reconciled all things in himself, restored marriage and the family to their original form (Cf.Mt 10: 1-12).  Marriage and the family have been redeemed by Christ (Cf.Eph 5:21-32) and restored in the image of the Holy Trinity, the mystery from which all true love flows.  The spousal covenant, originating in creation and revealed in the history of salvation, takes on its full meaning in Christ and his Church.  Through his Church, Christ bestows on marriage and the family the grace necessary to bear witness to the love of God and to live the life of communion”(AL 63).

“The sacrament of marriage is not a social convention, an empty ritual or merely the outward sign of a commitment…it’s a gift for the sanctification and the salvation of the spouses…it’s a vocation, inasmuch as it is a response to a specific calling to live conjugal love as an imperfect sign of the love between Christ and his Church…it isn’t a ‘thing’ or a ‘power’, for in it Christ Himself ‘now encounters Christian spouses.  He dwells with them, gives them strength to take up their crosses and so follow Him, to rise again after they fallen, to forgive one another, to bear one another’s burdens” (AL 71-73).

Jesus Himself lived the family communion in Nazareth:  it’s the wonderful mystery of Christmas, which is at the beginning of the human itinerary of the Man-God.
“The incarnation of the Word in a human family, in Nazareth, by its very newness changed the history of the world.  We need to enter into the mystery of Jesus’ birth…we need to peer into those 30 long years when Jesus earned his bread by the work of his hands, reciting the traditional prayers and expressions of his people’s faith in coming to know that ancestral faith until he made it bear fruit in the mystery of the Kingdom.  This is the mystery of Christmas and the secret of Nazareth exuding the beauty of family life! “(AL 65).
(Comment by Jesus Moran at the meeting of the New Family Secretariats held in Castel Gandolfo from 3 to 6 November 2016)

Furthermore the Eucharist has a deep social dimension, which requires Christian families to choose a sober and generous life style, open to the needs of others.

With these words the Holy Father introduces us to the theme of the education of children, which is “a call, a challenge, a joy”.