You are in: Home > Working together with the Laudato Si’ movement

The 4 October 2021 marks the end of “Time for Creation”, an initiative of prayer and concrete action to safeguard and protect our common home, which runs every year from 1 September till that date.

An appeal is being made by 46 religious leaders from around the world – including Pope Francis – for concrete action on climate change and a worldwide initiative entitled “Faith Plans for People and Planet” is being launched. faith plans for people and planet – Bing . The Focolare Movement is a participant. 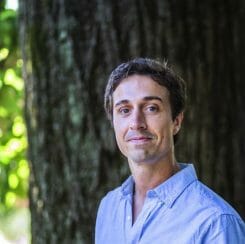 We talked about this with Tomas Insua, Executive Director of the  – Laudato Si Movement , a worldwide network of associations and movements working together for ecology and the environment.

What is the synodal path that the Laudato Si’ Movement wants to lead towards ecological conversion? You used to be called “Global Catholic Climate Movement”, why the change of name?
The Laudato Si’ Movement is a new reality in the life of the Church. It was founded only six years ago, in 2015, just before the release of Pope Francis’ encyclical Laudato Si’. The name “World Catholic Climate Movement” was too long, not everyone remembered it. Moreover, the climate crisis, which will continue to be a huge priority for the Movement, is not our only way forward. In the last few years, for example, we have also started to work on the biodiversity crisis and more.

A synodal process of discernment and dialogue between the different realities that make up the Movement – among which is the Focolare Movement – has therefore begun. After two years of work, the new name, Laudato Si’ Movement, has emerged, because Pope Francis’ Encyclical and its contents are at the heart of everything we do.

What are your plans for the future?
Among the various projects, the most short term one is the “Healthy Planet, Healthy People Petition” Home – Healthy Planet, Healthy People Petition (thecatholicpetition.org). It is important to sign it because from 1 to 12 November 2021 there will be the big UN climate summit (COP26) in Glasgow, UK. World leaders can set meaningful targets to protect creation. It is our responsibility to make the voices of the most vulnerable heard and to mobilise on their behalf.

During this “Time of Creation”, it has been wonderful to see how many activities have taken place and are still going on at the local level, around the world, thanks to Laudato Si’ circles.

It is a sign of hope that is developing at grass roots level and growing partly because of the awareness of the crisis of our common home but also because of the the desire to take action.

On 26 August 2021 you met the President of the Focolare Movement, Margaret Karram. What was your reaction to this meeting  and how can the Focolare interact with your Movement?
The meeting with Margaret was beautiful. I was with our president, Lorna Gold. For me it was wonderful to get to know the reality of the Focolare. What I really liked was the parallelism between the two movements. The Focolare Movement is obviously much bigger and has existed for much longer. We are a very young reality, but in some aspects we are similar to the Focolare: we share a  commitment to dialogue between different Churches and dialogue between great religions.

In fact, among us in the Laudato Si’ Movement there are those who live the Catholic faith, but at the same time we have animators belonging to different Churches and different religions. Learning from the Focolare’s experience of dialogue is a wonderful gift.

Alice Carwardine, an Australian Catholic, began her ecological conversion during Lent 2018, by writing a list of exactly forty changes. In seeking a Gospel text to serve as inspiration for this conversion, she chose the moment when Jesus enters the temple and overturns the tables of the money changers and the chairs of the dove sellers (Mt 21:12).

Five years after the publication of Pope Francis’ Encyclical Letter, the paradigm of integral ecology guides our reading of this pandemic time. An interview with Luca Fiorani, responsible for EcoOne follows.