You are in: Home > News > Conference call – October 3rd – Stories of people who put care in action

We go to Australia, Brazil, Germany, the United States of America and Vietnam, to see and hear about some “small” actions by different people who take care of their neighbors in need.

We visit different parts of Nigeria, where some people from the Focolare Movement show us their initiatives and projects offering care, sustainability, education and entrepreneurship locally.

In Ascoli Piceno, in central Italy, a number of associations have decided to unite to combat the economic and social hardship of their city. Thus, a few years ago PAS was founded, which means “Welcome and Solidarity”. It’s an experience of networking that found a home a few months ago.

On August 11th we celebrated Danilo Zanzucchi’s 100th birthday. He and his wife Anna Maria were responsible for the New Families Movement for over 40 years. Theirs is a very rich story, a story of love given, received and generated. We went to visit them at their home in Grottaferrata.

An interview with Saverio D’Ercole, creative producer at Casanova Multimedia which, in collaboration with RAI Italian Television, is producing the film about Chiara Lubich. Photos on the set: © Federica Di Benedetto, © Marco Bellucci

8. Hope for Lebanon. 11. With Pope Francis being brothers and sisters to all.

From Beirut in Lebanon some of the members of the community tell us how they are living this particularly hard period in their history after the explosion on August 4 that destroyed the port and damaged several districts of the city.

At the end of the link up, Maria Voce, President of the Focolare Movement, emphasized that “Pope Francis, in his new Encyclical ‘Fratelli tutti’ has taken on the pain of all people and calls everyone to come together to

The pain felt by Focolare due to a case of abuse in France
Maria Voce: “Immense suffering and unconditional collaboration by the Movement s...
Courage! Danilo Zanzucchi’s hundredth birthday
On August 11th we celebrated Danilo Zanzucchi’s 100th birthday. He and his wife ... 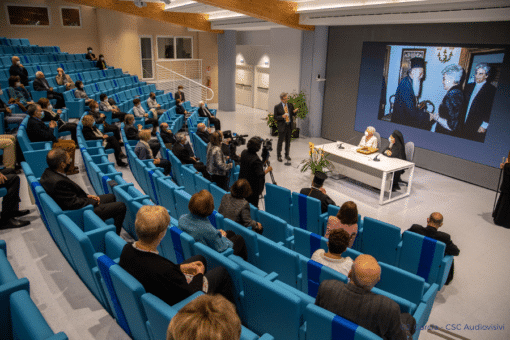