You are in: Home > Press > Focus > Inauguration of the International Patriarch Athenagoras – Chiara Lubich Chair of Ecumenical Studies at the Sophia University Institute, Loppiano, on December 14, 2017

The inaugural address was made by His Eminence Gennadios Zervos, Metropolitan of Italy and Malta, who spoke about “Patriarch Athenagoras and Chiara Lubich, protagonists of unity”. 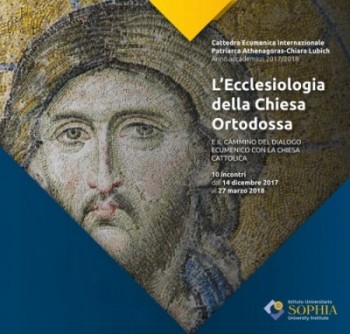 This Chair of Ecumenical Studies, unique in the international academic and cultural scene, is being founded 50 years after the first meeting between Patriarch Athenagoras I and Chiara Lubich.

When one thinks of the political, social and religious instability experienced in nearby countries, in the Middle East and in the Mediterranean region, this Chair assumes cultural and social relevance on an international level. It is meant to offer young people opportunities of study and research, whereby Europe can be made to breathe with its “two lungs”.

Its main objectives are: studying the cultural significance of the ecumenical journey towards full unity among Churches, revising its historical stages and examining its existential and social implications through the exchange of spiritual, theological and cultural riches of Christians both in the East and West. Furthermore, it aims at offering space and academically qualified courses to train those interested in promoting unity between the Orthodox and the Catholic Church through thought, dialogue and life, and thus contribute towards the encounter between peoples and cultures.

Message of the Ecumenical Patriarch Bartholomew I