You are in: Home > News > The Focolare Movement expresses its support for Pope Francis 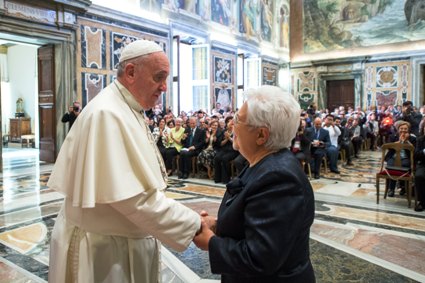 “Holy Father, you can truly count on our full unity and fervid prayer facing these attacks aimed at discrediting your person and your work of renewal,” Maria Voce wrote these words in a letter that was sent to Pope Francis on August 30th in which she expressed prayer and support, following the various attacks that have recently been levelled against him.

The Focolare president expressed gratitude to the Holy Father for the recent World Meeting of Families held in Ireland which, among other things, highlighted the rapport that was established between the Pope and those who attended. On behalf of the whole Focolare Movement, Maria Voce acknowledged the Pope’s heartfelt and repeated request for forgiveness from the families of the victims, and also the way his message of love was embraced.

“In every wound of the Church and of humanity,” Mary Voce says, “we recognized the crucified and abandoned Christ, and, together with you, we look at Mary in order to live with courage your example as authentic disciples.”

Finally, Maria Voce thanked the Pope for his recent “Letter to the People of God” which, in addition to expressing the solicitude and love of the Holy Father for humanity, indicates “how to share in the ‘cry’ that rises to Heaven from those who suffered and still suffer, as well as how to work so that such evils are not perpetuated. Let us embrace both his words and his concern.”