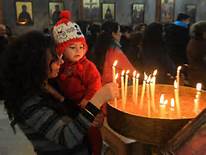 “The life of each day varies, because the danger varies. On some days nothing happens, and you could even forget that there was a war. On other days you could be on your way to work and get hit by stray bullets, or walk into a battle, or under falling bombs in the middle of a civilian area,” Pascal reports. He has been living in a focolare in Syria for several years.

How are we preparing for Christmas?

In Aleppo, Kafarbou and Damascus our communities are focusing mostly on the children, because in spite of the fact that it’s such a celebrated feast in Syria, families are finding it hard to experience the joy of Christmas. Therefore, the young people have done a lot of projects to raise funds which, joined to the donations that have come in from outside, has allowed them to expand their project of giving back the meaning of Christmas to the children and their families. In Aleppo, for example, there will be a feast for around 70 families; in Kafarbou they will visit houses in small groups, with food and gifts. In Damascus, where there are more possibilities, they’ve organised a Christmas concert and, in the meantime, will visit families with food, gifts, songs and games. . .”

And in recent months with the escalation of violence, have you focolarini ever reconsidered your decision to stay in Syria?

“No, never. The focolare’s presence is so important! There mere presence even without doing anything. It’s a sign that the Movement around the world is with them, with the Syrian people. I don’t know how to explain it. . . We’re not obliged to stay; we can leave. We’ve shared so many hardships with them over these years that they feel like we belong to the them, and we feel that they belong to us. Our reasons aren’t rational but affective, a matter of the heart. There’s no rational reason for staying in Aleppo. The Syrian families that stay do it because of their connection to the land, to their people, because everything else says: get out! Here, everything is disappearing, day by day there is less and less of a future for your children. I saw some remain out of a choice of love, to give witness. For example, some remained so that a school for deaf children could continue. Living for others gives you the meaning to life, it gives meaning to your existence.”