After the degree at Sophia 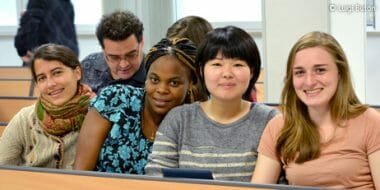 Some observations taken from the survey. The survey sample consisted in the first 80 SUI graduates, those who attended and concluded a two-year course with the achievement of a degree within the year 2014. In the first two months of 2015 this group was asked to respond to a semi-structured questionnaire, drafted to get some essential information on the professional pathways and lifestyles undertaken after their studies in Sophia.

Out of a total of young graduates 61 gave their response (75% out of the total) coming from 30 different countries; their collaboration enabled to focus on the value their studies in Sophia played in their quest for a job. Above all the study programme concluded in the foreseen period of two years in 91% of the sample; 81% found a job within six months, and 96% within a year. Today 51% of the degree holders have a stable job, 26% have a temporary job; 62% of the cases have a full-time job, and 26% work part time, while for 13% have a second job.

Most of the graduates (63%) are assigned roles of responsibility in companies, public administrations, universities and in other cultural, non-profit agencies: 28% are freelance professionals, entrepreneurs, consultants; 7% are top directors and managers, and 28% work in the field of scientific-cultural education and research.

Effectiveness of the educational program, compared to the actual job placement seems to have been confirmed: more than two-thirds of the graduates (68%) think that the SUI programme offered is aligned with the job they now hold. This effectiveness is set in relation to some specific transverse skills the graduates retain to have achieved or strengthened during their studies in Sophia. They mention in particular the capacity to interact in a “plural” context under the cultural and disciplinary profile , and problem-solving skills through the integration of different perspectives and competences, and managing situation of conflict, working in synergy in with other social and cultural players, promoting innovative solutions.

To note, lastly, that none of the graduates regretted having undertaken the chosen pathway: 72% would willing redo the course as is, while 28% would redo it and suggest some changes. Among these, they highlighted the lack of apprenticeship and internship available in the two-year programme, a priority targeted by the Institute’s competent Offices.

“The analysis of the strong points is very interesting,” Licia Paglione commented, “above all studying at Sophia meant getting involved in a programme of discovery and maturation of one’s own relational identity, a pathway that includes and upholds intellectual resources and at the same time imbues the psychological, affective, spiritual and operational dimensions and urges each toward commitment.”