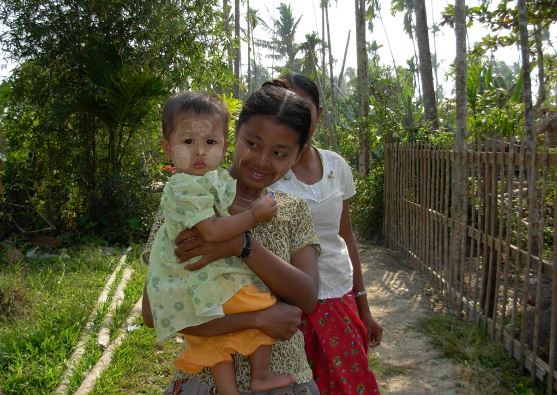 During the last visit to Taungoo, one of the regions where the Long Distance Support Project in Myanmar was launched, “we came to realise how many kids on Long Distance Support are now walking on their own,” writes the representative of AfnOnlus in Myanmar, Myanmar Vivienne Arpon. The visit by the local staff of Long Distance Support to the families of the children being supported was an opportunity to bring some concrete love and to better understand the difficulties they were facing.

Marta had been abandoned by her husband when the children, Justin and Joseph, were small. Through the project she found the strength she needed to raise her family. When he finished school Justin won a scholarship in culinary arts at an Institute in Yangon, and Joseph became personnel assistant at a fabrics company.

Philip and Anna’s family had been living in a slum in poor hygienic conditions. Long Distance Support has enabled them to live in a decent house and have a more dignified life. Although Philip is still studying, his parents have generously committed to support those who are worse off than they. “What gives us joy,” says Vienne, “is to notice how the improvement in the physical living conditions of these families has led to human and spiritual growth.”

Since 2006 the project has expanded in response to requests for help from Eric, the Burmese coordinator. Thanks to the intervention of other NGOs it was possible to build a new school in Yenanchaung, the Magway region and find teachers and qualified personnel. The school children have been orphaned by HIV/AIDS or abandonment. Many of these teenagers have been able to find good jobs now, so that in addition to being financially independent they can even contribute something to their families. “We’re pretty confident,” Vivienne writes speaking to supporters, “that the future of these children is assured, not only because they can study, but because they felt the love from your side, which assures them. For all this, thank you very much for the sacrifices you have made.

In fact, it is not always easy to live solidarity, but when you take into consideration those who are living in worse conditions than yours it can redimension your own needs and wants and can lead to a more sober lifestyle, perhaps even a freer life for yourself. One family from Messina, Italy writes of how their experience with long distance support with AFNonlus is enrichment for them that has opened them to the whole world. The boy they were supporting has grown up and, thanks to the support he received through the programme, is now working. Nevertheless, there are many other children living in conditions of need and the Sicilian family, in spite of the financial problems that everyone is going through, didn’t turn their backs on them. They decided to continue contributing their support: “With four children it isn’t easy to make ends meet. In spite of the uncertainty, we believe in this project and are very happy to offer some concrete help to people who are worse off than we are . . . in this case, little Vincenzo from Myanmar.”

The Myanmar project extends through a territory which, due to environmental conditions and historic reasons was never developed adequately. Many families and children are victims of malnutrition and illness, such as malaria, tuberculosis and AIDS. With the support from contributors, the project is giving hope to people, offering a different future to the new generations and contributing to the human development of the population.

The Focolare has been in the Asian world since 1966. Recent cultural and interreligious events have remembered those years: 50 anni di storia.