The Gen Movement has been around for fifty years, and still possesses the same freshness and the same ideal as when it first began. The Gen are the new generation of the Focolare. They will be gathering for their congress at Castel Gandolfo on November 17-20, 2016. A thousand young people will attend from all parts of the world. It’s not just any congress this time, but the big celebration of their 50th anniversary.

In 1966, Chiara Lubich had appealed to the Focolare’s young people, that they engage the greatest number of their peers in living Jesus’s prayer “that all may be one.” Today, the Gen are everywhere: they belong to different religious faiths, speak many languages and dialects, and show the same enthusiasm and evangelical zeal that they had at the beginning.

The first person to be raised to the glory of the altars by living Chiara Lubich’ spirituality of unity, was a Gen – young Chiara Luce Badano. She died in 1990 at the age of 18 and was beatified in 2010. She has become an example of belief in God’s love, both for young people and adults, even amidst illness and suffering. Each year, her feast day is celebrated around the world on October 29th. 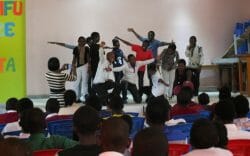 A few weeks ago the Gen held a celebration in Iringa, Tanzania where they presented her as a model of Christian life. They showed a video on Chiara Luce to a hundred young people, which was followed by testimonies and traditional dances. “I learned so much: for example, that I should love whoever is beside me. Here I discovered that it’s possible to be together in love, despite our differences.” “What touches me is Chiara Luce’s patience. She accepted her illness in its entirety, living every moment without complaint.”

Despite all obstacles, the Gen forged ahead, for 50 years. They are truly the “Unstoppable generation”!

Fragments of history of the Gen Movement