The future of the EoC: knowledge that can strengthen action

Stefano Zamagni, economist and President of the Pontifical Athenaeum for Social Sciences, recently spoke in Loppiano, Italy at the event marking the 30th anniversary of the  Economy of Communion. We present an excerpt from his address in which he underlined the contribution of the Economy of Communion to the evolution of economic thought.

‘(…) I must confess that when, exactly 30 years ago, I listened to Chiara Lubich’s speech in Brazil when she launched the Economy of Communion project, I was very impressed but also shocked. Economy as a science uses many words such as wealth, income, efficiency, productivity and equity, but it does not use the word communion.  I asked myself: “How could someone like Chiara whose cultural background did not include an economic element have launched an intellectual challenge of that kind?” There had to be a special charism at work and we know today that there was. This positively disturbed me. I began to reflect and asked myself: “Why, in the long history of economic thought, has this concept never been addressed?” A few years later I came across the work of Antonio Genovesi, the founder of civil economy, and I understood a whole series of connections between the Economy of Communion and civil economy.

Obviously, at the beginning, there were many difficulties for the Economy of Communion. I remember that in 1994 in Ostuni in Puglia, Italy, the MEIC (Eccelsial Movement of Cultural Commitment) organised a series of cultural seminars during the summer. In a presentation chaired by a famous Italian economist, two newly graduated focolarine had the audacity to present the Economy of Communion project. This professor began to say: “This is nonsense, because it does not satisfy the criterion of rationality.” I was present and asked him: “But do you think that the gesture of the Good Samaritan satisfies the criterion of rationality? You see,” I continued, “you are a slave to a paradigm, to a way of thinking that you have sucked out of your studies without addressing the problem, because the rationality you think of is instrumental rationality, but there is also expressive rationality. Who said that instrumental rationality is superior to expressive rationality? Don’t you know that the Economy of Communion is part of the model of expressive rationality? In this case, expressive means that a charism is expressed – because charisms must be expressed and translated into historical reality.”

The Economy of Communion has made it possible to recover that tradition of thought regarding  civil economy that began in Naples in 1753. For example, think of the economy and the school of civil economy over which Luigino Bruni presides. In addition, the recent big “Economy of Francis” event which was really a mixture of civil economy – a paradigm, which is view of reality that is embodied in models, projects and different theories – and the economy of communion. This event took place recently, but I am sure its impact  will soon become apparent. 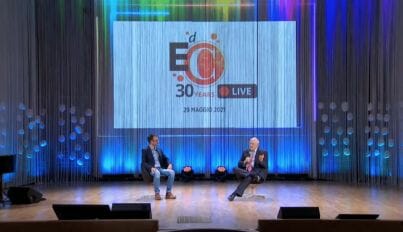 To close, I would like to use a word that has, unfortunately disappeared from use for at least a century: this word is “conation”. It was coined by Aristotle 2400 years ago. It derives from the combination of knowledge and action and means that knowledge must be put at the service of action, and action cannot be exercised and bear fruit unless it is based on knowledge. I say this because the challenge of the next 30 years, and even more, for the Economy of Communion is to strengthen the knowledge component. Up to now, priority has rightly been given to action, to achievements. But we must be aware that if action is not continually nourished by knowledge, it risks disintegrating.

Chiara Lubich had a capacity for intuition and understanding, and therefore for foresight, even on subjects in which she was not a specialist. Indeed, the contribution of the Economy of Communion to the evolution of economic thought as a science has been remarkable. Luigino Bruni directs a research doctorate programme in the economy of communion and civil economy at the Lumsa (Libera Università Maria Assunta) in Rome, Italy; here in Loppiano there is the Sophia University Institute and in other universities too it is no longer forbidden to speak of Economy of Communion. I think this is a great, great outcome. (…)’

To review the live broadcast from Loppiano for the 30th anniversary of the Economy of Communion, click here