You are in: Home > Economy > Irish team build dairy in Burkino Faso 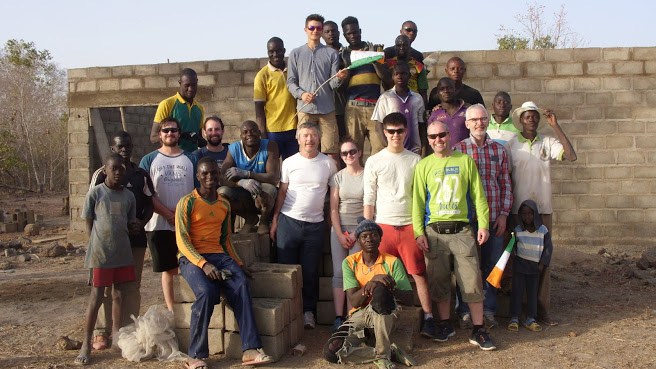 Flying out on December 27 and not returning to Ireland until January 6, Cavan optician Paul Connolly and seven others laid bricks and dug a pit for a milking parlour at an agricultural school near Pahin, a town in the south of the West African country, where 45% of the population live on little more than a Euro a day.

The project began four years ago when Mr Connolly, who is linked with the Focolare ‘Economy of Communion’, where about 800 businesses aim to address social problems by splitting their profits, met Fr Expedit Gnoumou, a priest determined to help his people “escape from subsistence farming”.

He decided to support the project and together with other collaborators, has now contributed over €50,000 to developing the agricultural school.

Giving the project a hands-on aspect, the Irish team of seven men and one woman worked alongside 12 local men, sharing labour, meals, and “lots of craic”. “I believe the value of having personal relationships with the poor of the world is better than donations,” Mr Connolly told The Irish Catholic.

Mr Connolly is now focusing on obtaining milking equipment for the dairy, which in the meantime will be used to store maize and sorghum.