You are in: Home > Milestones > Chiara Lubich in Ireland

Chiara Lubich arrived in Ireland on 21st February 2004 on an almost perfect winter day, with clear blue skies and bright winter sunshine. On her arrival at the Focolare Centre she was given a warm Irish welcome with, children offering her flowers and musicians playing traditional Irish music. 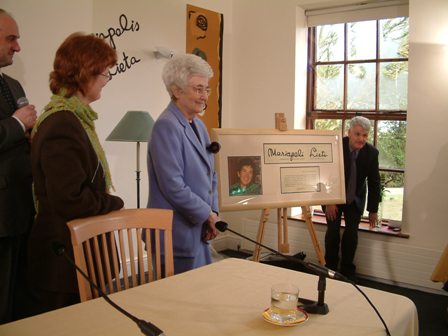 The main reason for Chiara’s visit to Ireland was to inaugurate the Focolare Centre in Prosperous, Co. Kildare, which would from then on be called ‘Mariapolis Lieta’, as a tribute to Lieta Betoño who was one of the founding members of the Focolare community in Ireland. The inaugural ceremony, including the unveiling of a picture of Lieta alongside an extract from Chiara’s letter to her, indicating the new name of the Centre, took place in an atmosphere of great festivity with local Civic and Church leaders joining Focolare members and their friends.

Other significant events during Chiara’s visit included meetings with members of the Focolare from all over Ireland and with Church leaders and Politicians.

Meeting with Members and Friends of Focolare

Over a thousand members and friends of Focolare came from all over Ireland to meet Chiara in University College Dublin on 22nd February.

Speaking of dialogue and of union with God, which can be reached through loving your neighbour, Chiara left aside her prepared script and engaged with her audience in a relaxed and informal way. She spoke with energy and enthusiasm of the need to seek solidarity and fraternity, and to build up the human family as the task we are all called to. In the changing Irish scene, the people who were once emigrants themselves now see asylum seekers and refugees coming to their country and so, she insisted, “there are lots of possibilities to dialogue, to love, for example those who have come from other countries”.

Her talk raised questions about the big issues facing governments and peoples today but it also touched on the everyday realities of life. It was an encouragement to go to the heart of the Christian message and not the outward living of it, because she said: “God is not a perfectionist, He is love.”

The programme of the whole day was beautifully crafted mixture of interventions, experiences and artistic contributions including a pageant entitled “In Search of the Light” which told the story of a people with a history over five thousand years old, touching on significant moments in Ireland’s ‘search for the light’. It concluded with the recognition that Ireland is still looking for the light and it has found it in the Focolare spirituality. Reflecting on their rich national heritage, Chiara concluded that it was not surprising that the Irish, whom she described as a people who were “naturally Christian” would find spiritual kinship with the Focolare which has been described as “a people born from the Gospel”.

The Archbishop of Dublin, Diarmuid Martin, drew the day to a close by speaking of the role the Movements can play in the new evangelisation, which is so necessary to meet the challenges of today’s world. He encouraged all those present to live this charism saying, “It is a charism of unity which strengthens the unity among Christians and promotes an ecumenism of heart, where love is alive in each one, helping us to understand one another better and to overcome the tensions of the divisions.”

Meeting with An Taoiseach, Bertie Ahern

Chiara’s first public appointment on Monday 23 February was a meeting with the Irish Taoiseach (Prime Minister), Bertie Ahern, who received her at his Constituency office in north Dublin, with his characteristic warmth. Greeting Chiara, he told her that he had read a great deal about her and had been impressed by what he read. In a very cordial half hour meeting, the Taoiseach discussed with Chiara the challenge of European integration. Commenting later on the meeting he said: “Her message of working together is very relevant to Ireland where we have had a divided island, a divided society and religious difficulties. I think what I heard today and what I’ve read in the past bears witness to the great work which is carried out by the Movement which brings people together, whilst understanding their difficulties. I think the work this woman does is very important. I am pleased and honoured to have met her.”

Later the same day, Chiara addressed eighteen members of the Catholic Hierarchy including the Primate of All Ireland, Dr. Sean Brady, Cardinal Desmond Connell of Dublin and the Papal Nuncio, Archbishop Lazzarotto, on the theme “The Spirituality of Communion.” Proposing the church as a fresco of communion, she spoke of the Fathers of the Church and then putting aside her prepared talk, shared some personal experiences.

This was followed by a moment of dialogue as Chiara answered questions on contacts with members of other faiths, on politics, on collegiality and on the family. The questions from the Bishops revealed something of the concern they have for the difficult moment their country is passing through. In answer to a question about how to speak a language which engages with the most disaffected part of the Church, Chiara said: “There are many who teach, but few models, few witnesses. Today people need witnesses, people who live what they say.”

At the close of the meeting, when asked for his reaction, Cardinal Connell commented, “I was struck by Chiara’s vivacity which can only come from the Spirit”. Whilst another Bishop admitted to have come to the meeting feeling a little bit sceptical but saying that he left being convinced that “here we have a gift given by God to his Church”.

On Tuesday, 24th February, Chiara was welcomed to the Presidential Estate, Áras an Uachtaráin, in Phoenix Park Dublin, by President Mary McAleese. In a very cordial meeting, they discussed the prospects for Europe and in particular the question of the Christian roots of the continent. Commenting at the end of fifty minute meeting, Chiara said, “I appreciate the President’s deep Christian faith, and I felt we were very much in tune with each other, in particular through her sensitivity to a united Europe.” President McAleese paid a visit to Mariapolis Lieta on 31st January to mark the 10th Anniversary of the “little town”. On that occasion she spoke fondly of her meeting with Chiara in February 04 and praised Focolare for its contribution to a changing society in Ireland. Chiara sent her a gift of a copy of “Essential Writings” accompanied by a personal letter. Alongside her official message, these tokens rendered Chiara’s presence very tangible, indeed many commented that the atmosphere that evening was just like those days lived when Chiara was physically present.

On the 24th February a high level meeting took place at the Smurfit School of Business in Blackrock, Co.Dublin, which had as its theme: “Humanising the Global Economy – Towards an Economy of Communion” and was introduced by the Governor of the Bank of Ireland, Laurence Crowley. Some 200 academics, business people and students attended the conference which studied the ‘Economy of Communion’, a new economic theory and praxis that aims at building a person-centred economy. Chiara was not able to be present, but her personal secretary, Eli Folonari, gave her address in her place.

That same day, representatives of the Focolare met a group of politicians in the Irish Parliament, Dáil Éireann, where they spoke of the movement’s vision of a politics based on fraternity, to an attentive audience made up of politicians from North and South.

During her stay, Chiara found time to meet with old and young, members of the Focolare and their friends, Church leaders and politicians. She gave talks, she gave direction and shared her insights. Her visit was a time of hope and of optimism. It remains very much alive in the hearts of the Focolare family in Ireland not as a memory of something past but an encouragement to go ahead bringing the Focolare Ideal ‘that all may be one’ wherever they are..