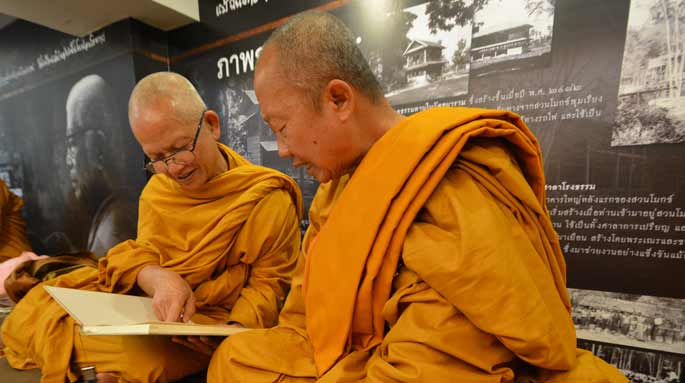 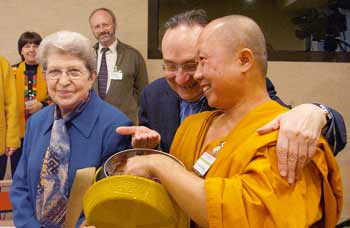 «When Luce Ardente started to bear witness to the Ideal of unity among the Buddhist monks, Giuseppe Maria Zanghì, or Peppuccio as many called him, and who passed away a few days ago, said that he was “a new St. Paul for Buddhism”.

Knowing how difficult it is for a monk to take part in a Christian and foreign movement, I had doubts about how this affirmation could concretely come about. Now, after precisely 20 years, I must say that those words are coming true.

It all began in 1995, when a Buddhist monk set foot for the very first time in the centre of the Focolare Movement: his name then was, Phramaha Thongrattana Thavorn. He had arrived in Rome to accompany one of his disciples, Somjit, who, for a short period before his marriage, was living an experience of monastery life, in line with tradition of all Buddhist youths. On that occasion, Phramaha Thongrattana Thavorn, translated as ‘fine gold,’ met Chiara Lubich and was very impressed. She was also struck by him, and on his request, gave him a new name: Luce Ardente (Ardent Light).

In all those years of acquaintance I had never noted in him, such a impelling force and enthusiasm as in those days, in announcing universal brotherhood, “mother Chiara’s ideal” (as he still calls her today). Today, while participating in an important ceremony as Luce Ardente’s guest, before the 120 monks and the highest Buddhist authorities of the region, he took the floor to spontaneously but very clearly give a testimonial of his experience with Chiara Lubich and the Focolare, and openly declared that he is a member of Chiara’s huge family diffused in more than 120 counties with millions of members.

Unperturbed, the monks listened: some were amused, others interested, and a few were perplexed as would be expected in any “religious community.” Before, during and after the ceremony Luce Ardente, often breaking the rules, greeted those present one by one, manifesting great respect and affection towards the elderly monks. 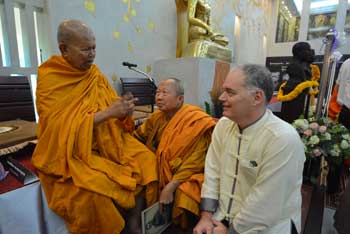 Luce Ardente continues to repeat even now: “The time has come for me to tell everyone how much good Mother Chiara has done to my life as a monk. I feel that she continues to give me an interior impulse and strength to bring the ideal of brotherhood to all.”

The death of Peppuccio – who did so much for interreligious dialogue – and the opening of the cause for the beatification of Chiara, are strong and important moments not only for us Christians but for all the members of the Movement.

The day after Chiara passed from earthly life to heaven, on 14 March 2008, Luce Ardente remarked: “Chiara no longer pertains only to you Christians, but she and her ideal are now a legacy for all of humanity.” In these really special days, these facts testify that Peppuccio’s words are becoming a reality before our eyes.

While he participated via live streaming in the opening ceremony of the cause for the beatification of Chiara Lubich, Luce Ardente commented: “Now, more than ever, we must testify to the sanctity of Chiara together.”