In the district of Rotorua (New Zealand) the earth’s crust is only 4 km thick. Here, one can admire the magnificent spouts of geysers right in the heart of the city, steamy puddles with bubbles gushing out of the surface. The ground emits a heat that even reaches 120°C. This is where the English colonisers had tried to install Roman baths. Still today thermal activity is at the centre of the touristic prospects of Rotorua, a city immersed in the greens and surrounded by hills. On the banks of the lake with the same name, rises the Keswick Christian Camp, a summer facility. This is the where, the Focolare scheduled to meet, about 156 people from the various cities of New Zealand’s two main islands. The objective was to spend three days together, away from the daily routing, to go deeper into the spirituality of unity. 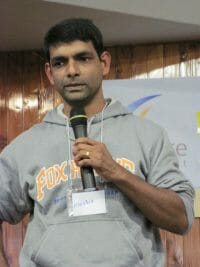 Maori, Filipinos, Chinese, Koreans, Dutch, Anglo-Saxons, Italians, Maltese, Singaporeans, Taiwanese, French, Tokelauans, Indians, Pakistanis…: an overwhelming variety of ethnic groups in a unique model of humanity. Despite such diversity, there was a family atmosphere from the start.

Besides moments of spirituality and recreational activities, the programme dedicated a lot of time to getting to know one another and exchanging of experiences. The Pitcaithly family from Chistchurch, the country’s second city recounted a very moving experience of when the city was devastated by two big earthquakes. A tragedy that united the population in a sole slogan of solidarity “Kia kaha, stay strong Christchurch!” that also stood for the Focolare’s effort to gather funds offered by people from various parts of the world.

The group from Gisborne, the city that has the privilege of being the first on this earth to see the sun rise, presented the “Fish & Chips Club” project. One its aims was to gather funds for the educational activities of young people, which has been fostered for many years now by people from the various Christian Church, together with others of non-religious beliefs. Together they were able to do something useful for others. Despite the multi-features of the youth and adults, they meet once a month to reflect on the Gospel and share experiences on how they try to put it into practice. A really significant way of growing as a persons and draw strength to bring ahead the various handicraft and sports activities of a club where everyone can be oneself and where people try not to stress the differences but the values all can share 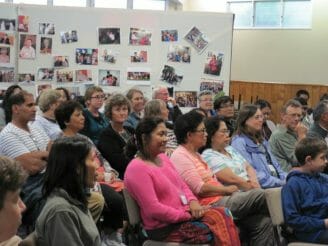 . Even if New Zealand seems to be a wealth land, an Indian-Pakistani family recounted their difficulties in integrating with society. Martis, father of two kids, was working in a home for the aged and his wife Antoneta  in a small butchering company. All of a sudden they both lost their jobs. The quest for a new one went on without any results, so much so that they had decided to return to their homeland. Just ten days before the expiry of their visa, from a nearby town someone managed to arrange for a job interview for Martins who thus could renew his stay permit. It was an immense joy for this family that had given a strong testimonial of God’s love which manifests itself also through the community.

Theresa, on summarising the wish of the youth present said: «What we experienced these days has given us a big boost to return to our respective cities and start all over again.» Anne, an elderly Maori lady, held in high esteem by her tribe, concluded: «Aroha te mea nui o te ao Katoa»; which in her language means: «Love is the biggest gift in the world.»