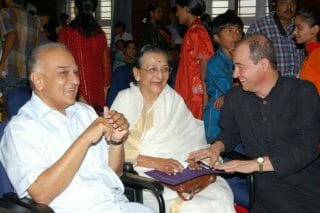 Roberto Catalano (right right) with Minoti Aram, of the Shanti Ashram in Combiatore (India), and other Hindu participants at an interreligious workshop.

“Fifty years ago, as a young boy, I would never have imagined having an adventure so fascinating as that of this dialogue, on the path paved by Nostra Aetate (the prophetic council document which signalled the opening of the Church towards a constructive and positive dialogue with the different religious traditions of the world). Looking back, I must be grateful to God, but also to dozens of people I have met on this path, which I never would have imagined I would take. Starting from my family, where I learned that to dialogue is always better than to argue, with my university classmates and the protests of the 1970’s, with young people of the Catholic movements where I grew up, with the working world which I entered still in my twenties, and later, with people from Asia, from the Americas, from Africa and from different parts of the world, including New Zealand and Australia. It is a great treasure, upon a path which the world in 1965 could not even imagine.”

This is a personal recollection, to accompany the convention which celebrates fifty years since the conclusion of Vatican Council II (Georgetown, Washington, May 22-24), organized by the Ecclesiological Investigation, a group of theologians who meet once a year and discuss a particular topic. This year, the chosen theme was Vatican II, Remembering the Future. Various representatives from Rome participated, including Cardinal Kasper and Cardinal Tauran. 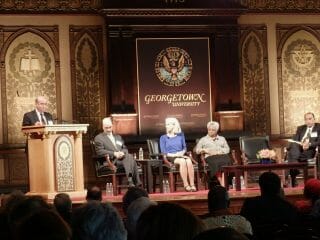 “The conference is of great value,” continues Roberto Catalano. “There were speeches in the plenary session and also in parallel sessions of great theological and spiritual depth. Great human and intellectual openness, and a desire to deepen our understanding of an event like the Council from different points of view: geographical without a doubt, but especially of perspective and of content. There were speeches that sought to contextualize what happened between 1962 and 1965, and why. Others confronted the historical aspects which brought about the unfolding of the council event. But another important topic was the interpretation of all that has happened after the council and how these fifty years have not been sufficient for its fulfillment. The opinions came in succession in an atmosphere of profound listening, interest and intellectual and spiritual openness.”

“Even among different opinions, the Council emerges from this period of study half a century from its conclusion, as an event that changed the Church and humanity. The prophetic dimension which characterized the documents that were promulgated at the end of the council assembly is especially striking.” And it is precisely on this dimension of prophecy which his discourse is founded, upon the role of some movements, such as the Focolare Movement and Sant’Egidio, in the actualization of Nostra Aetate. Dialogue as a duty, dialogue as a culture of meeting, dialogue as a pilgrimage and dialogue as open and emphatic thinking are just a few of the points expounded by Catalano.

One day of the convention was entirely dedicated to ecumenism and to what the Council has meant for this aspect. There followed discourses by Catholics, Lutherans, Presbyterians, Orthodox, and Episcopalians: “There was also a serious tone due to missed appointments and obstacles that still remain for a true communion between the various Churches. But the most significant speech, marked by several minutes of thunderous applause within the Episcopalian National Cathedral, was that of Cardinal Walter Kasper, who, after a masterful analysis of the history and a few theological aspects of the ecumenical matter, concluded with his pragmatic but refreshing optimism; “Unity perhaps has already started!”

“It is clear,” concludes Catalano, “how in these fifty years enormous steps forward have been made, and that unity will never be a ‘return’ or a unification, but a ‘communion.’“