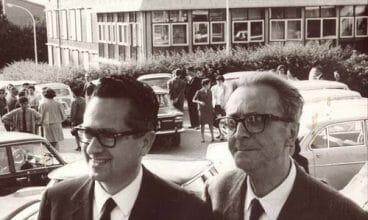 When Giordani met the Focolare Movement in 1948 he was a Deputy of  the new Italian State, and he was battling for a more religious view of public life.

The latter came at a cost: marginalisation. He recoiled from the two often extreme readings of the Gospel: that of disincarnated intimism; and that of the tendency to reduce it to worldy messianism. Taken in its divine and human wholeness, the Gospel message is the seed of a revolution – the revolution – that shook history and continues its work today in favour of human freedom.

The underlying idea of many of his books is the connection between the divine and human that needs to be given more attention. Humankind’s dignity and freedom originate in welcoming Christ into its life. His main points include: freedom, equality, solidarity, the social use of wealth, the dignity of work, harmony between Church and State, morality in public life and economic activity, anti-militarism and pacificism at an international level. These were his positions when he had that encounter which would give a new surge to his longing for God.

His journal entries describe his distress because of the inconsistencies between his private life and his public life, the fagility of his personal “asceticism thwarted by failures in  politics, literature and social life.” He notes his feelings of helplessness in responding to his personal longing to “spread holiness from a poor piece of news print when he was Director of “Il Popolo” newspaper . . . of “spreading holiness from a hallway of lost footsteps” in the halls of Montecitorio. “Who will do this miracle?” he asks in August 1946.

The answer to that question is profiled in his meeting with Chiara Lubich, almost a providential “calling”. It provided him with the way to revive his already lively Christianity and give it more divine depth on one hand, and more social depth on the other. For him that meeting had been an encounter with a charism. It gave to his spirit that had nourished itself on a profound knowledge of spiritualities in the history of the Church an immediate vision of this charism’s vast dimensions and theological and historical implications. The Spirituality of Unity immediately appeared to him as an enormous usable energy not only within the Church but also in civil society for “transforming human coexistence into citizenship with the saints . . . to inject grace into politics and to make it an instrument of holiness.”

Thus one of the major contributions that Giordani would have to make to the development of the Focolare Movement was that of helping that initial small starting-group to also become aware of the human implications of the charism that was manifesting itself.
Now that the Focolare tree has blossomed on every continent, its lifeblood remains not only the life of Giordani, his social vision of Christianity for which he worked and fought throughout his life, but also his standing up like a prophet of the Bible against every split between faith and works and against every freedom-killing that results from it.

The Focolare has been left a precious legacy, drawn from Giordani’s own thought and method. I believe the path he shows us is valid for the whole Christian world, with his penetrating attention to the historical experiences of Christian life and with its balanced Gospel vision that is far from fideistic naivete and from fundamentalism, but open to striving for “rational collaboration” between the City of God and the City of Man.