Sportmeet at the world conference on Sports and Faith 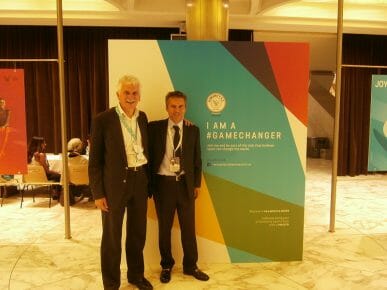 «It was like an immersion in beauty, an occasion for new relationships, a well of inspiration, and an amazing correspondence to Chiara Lubich’s vision of the rapport with human realities. It was sports as a potential change factor and thus at the service of humanity, with a resolute openness to authentic dialogue without foregoing the sharing of inspiration founded on Wisdom that touched each one, and hopefully also the minds and thus the intentions of the multiform representatives of world sports.»

This was the impression of Paolo Cipolli, world coordinator of Sportmeet, founded by Chiara Lubich in 2002 with the objective of contributing to universal fraternity in and through sports.

Pope Francis presided the opening ceremony in the presence of important guests, from UN Secretary General, Ban Ki-moon, to the President of the International Olympics Committee, Thomas Bach, and leaders of other churches and great religions.

«Sports is a highly valuable human activity able to enrich the lives of people, and which men and women of every nation, ethnic group and religious belief can enjoy. The Olympic motto, “altius, citius, fortius,” is an invitation to develop the talents God has given us. It is important that all have the chance to participate in sports activities, and I am glad that in these days, the core of what you will focus on in this meeting also includes the commitment to ensure that sports becomes ever more inclusive, and that its benefits be really accessible to all.»

In referring particularly to the growing number of peripheries, the Pope also warned about indifference: «We all see the enthusiasm of children playing with a punctured ball or one made of rags in the outskirts of some big cities or in the alleys of small towns. I would like to encourage everyone, institutions, sports societies, educational and social groups, and religious communities to work together so that these children, especially those who are excluded due to poverty, can practice sports in dignified conditions.»

The Pope concluded with a precise challenge: «Maintain the genuineness of sports, and protect it from manipulations and commercial exploitation. It would be sad for sports and humanity, if the people would no longer be able to believe in the authenticity of sportive results, or if due to cynicism and disappointment, these sensations were to prevail over enthusiasm, and joyful, unselfish participation. In Sports as in life, it is important to fight for the result, but also to play well, and more importantly with loyalty!»

Many athletes stood onstage with the Pope, among which were the Italians, Alessandro Del Piero and the Olympic gold medal fencing champions, Daniele Garozzo and Valentina Vezzali; the swimmer from Zimbabwe and former world record holder, Kirsty Coventry; the gymnast, Igor Cassina, and paralympic athletes such as the multi-champion, Anna Schaffelhuber; the athlete, Giusy Versaceand; and the Rio 2016 gold-medal fencing winner, Bebe Vio. The words of the Southern Sudan runner, Paulo Lokoro, who competed in Rio in 2016 with the Olympic team of refugees, were brief but very important. 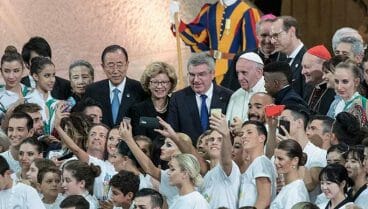 The 300 delegates who gave a very important contribution to the convention were of various ethnic groups, cultures and religions, representing sportive and non-sportive international organizations, governments, associations and NGOs of companies involved in the variegated world of sports. The moments of reflection, in-depth study of themes, testimonials, and work groups, focused on the irreplaceable and important role of sports in serving humanity.

Paolo Crepaz of Sportmeet underlined: «All were overjoyed to have participated and contributed to a historical event due to the novelty of the great attention the Church pays to the world of Sports.»

At the conclusion, the athletes solemnly affixed their signatures to symbolise their commitment to becoming game changers,” to form and promote a global network in the conviction that sports can change the world.